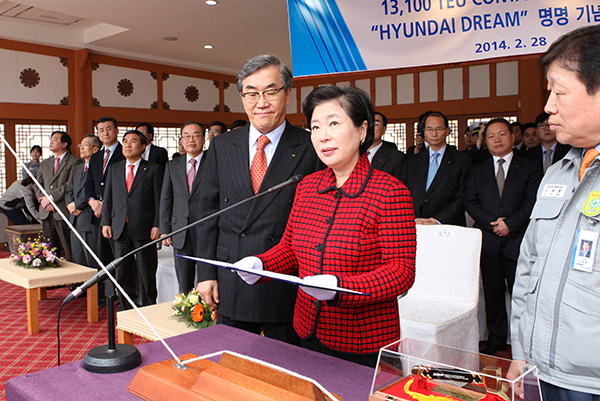 HMM yesterday took delivery of a 13,100-TEU (20-foot equivalent unit) container carrier from Daewoo Shipbuilding and Marine Engineering at its Okpo Shipyard in Geoje, South Gyeongsang. The ship was ordered in 2011.

Hyun was there to name the new vessel the Hyundai Dream. It was the first time she has attended a naming ceremony since becoming head of Hyundai Group in 2003.

“With the name Hyundai Dream, we want to have a new dream,” said Hyun. “Although the shipping industry is having a difficult time, we will achieve their dream of revival through the Hyundai Dream, Hyundai Group and HMM [Hyundai Merchant Marine].”

HMM said the Hyundai Dream will be its largest container carrier, with its size reaching 365.5 meters (1,197 feet) long, 48.4 meters wide and 29.9 meters high. This year, the company is set to take delivery of five large container carriers to operate between Asia and Europe.

This will bring HMM’s total number of 13,100-TEU vessels to 10. HMM, the nation’s second-largest shipper, said the Hyundai Dream is powered by an environmentally friendly engine that reduces CO2 emission and increases fuel efficiency. It is also equipped with bulletproof glass to enhance the safety of crew members.