Comedian lost his sight, not humor

Comedian lost his sight, not humor 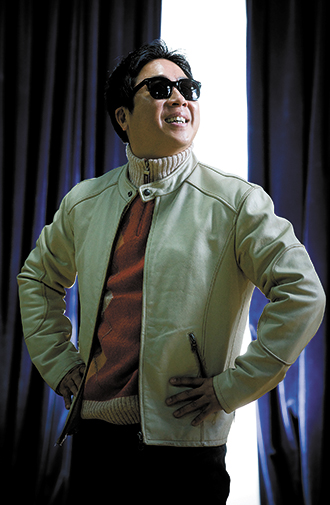 Comedian-turned-actor Lee Dong-woo poses while practicing for a play in which he will perform as the lead character next month. By Kwon Hyuk-jae

Lee Dong-woo, a comedian turned actor, never hesitates to take on a challenge. Although he is visually impaired, Lee is constantly trying out new things. Since last year, the 45-year-old has released a jazz album, staged a concert and even completed a triathlon. For his next challenge, Lee is ready to act in a play.

“I want to become a Superman,” Lee said, in an interview with the JoongAng Ilbo last week at a practice studio in Daehangno, central Seoul. “I want to become a person who has the courage to try things without hesitance if they are valuable, even if the outcome is uncertain.

“Whether or not it works out, I want to learn the courage to take on challenges.”

As part of his so-called Superman Project, Lee will be on stage, acting in the lead role of the play “Superman in My Memory.” The play will be held at Chungmu Art Hall in Heungin-dong, central Seoul, from March 8 to April 6. Lee will be playing a once-famous actor who lost his eyesight after a car accident and then returns to his hometown to earn a living by running a small supermarket.

“I’m happy that I’m able to be in a ‘good’ play,” Lee said. “What I mean by ‘good’ is a play that leaves the audience feeling warm afterward and that they should recover their relationships. It’s one in which they get to think about the meaning of family.”

Lee added that he hopes the play will help lonely people feel a little less alone.

Lee was one of the five members of a K-pop group called Tin Tin Five. In 2004, however, Lee was diagnosed with a retinal disease and by 2010 he had lost his sight.

As a visually impaired person, it isn’t easy for Lee to prepare for the play. It takes three or four times the preparation, and memorizing the script is especially difficult. Lee doesn’t know how to read braille but instead listens to the script using a computerized speech program. Lee also needs to make sure he knows all the stage directions.

“When practicing for the play, I often tripped on stage, and once my glasses broke and I sprained my wrist,” he said.

Although he was talking about the pain he had to endure, he sounded upbeat.

“There is one good thing about not being able to see,” Lee said. “I don’t get tense or extremely nervous for no reason on stage. Now I know why people close their eyes when they’re scared.”

It wasn’t all that easy for Lee to accept the disease that took away his sight. When he was first diagnosed in 2004, he alternated between anger and despair. But he credits the love of his wife and his 9-year-old daughter for helping him learn acceptance.

“By the time I woke up emotionally, I found out that I had gained weight and was up to 90 kilograms [188 pounds],” Lee said. “When I was in despair, all day long I just overate and drank at home.”

In 2009, Lee opened up to the public about his suffering. Soon after that, he took his troubles to the gym and worked out for two hours every day. In three and a half months, Lee lost 20 kilograms.

“The change inside me also changed my life,” Lee said. “Life for me before that was like hell, but afterward life improved in a virtuous circle. It was a wonderful experience.”

Lee may enjoy challenges, but even he finds modern phones to be difficult, especially now that 2G mobile phones for the visually impaired are no longer being manufactured.