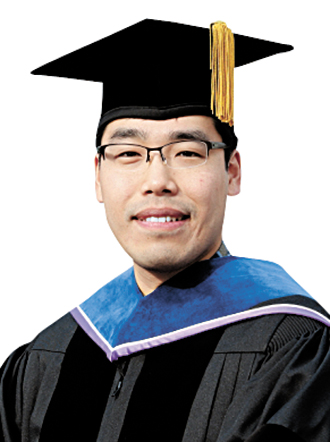 Park Tae-woo was just 7 years old when he discovered his passion for video games, starting out with Galaga, a fixed-shooter, space-themed arcade game released in the early 1980s.

As a teenager, he mastered Dance Dance Revolution, and by the time he entered college, Park had moved on to Sudden Attack, a multi-player, first-person shooter game, as well as Samgukji, a strategy-simulation game.

He eventually started developing his own games, and even led a game-making circle. It was that long-term relationship with video games, as well as his broad expertise, that led him to obtain the first “gaming doctorate” at the Korea Advanced Institute of Science and Technology (Kaist).

Park received his doctoral degree yesterday from Kaist. His thesis, entitled “Enabling Pervasive Social Exercise Games with Heterogeneous Exercise Devices,” deals with linking exercise machines, like a treadmill, online to motivate people to exercise while also playing a healthy and fun game together.

Park’s love for games and his extensive experience playing them helped him immensely in writing his paper.

But at first it didn’t have the most positive impact on his coursework. To enter university, he had to study for an additional year. Likewise, his undergraduate marks weren’t satisfactory enough for him to gain admission to graduate school right away, and he finished his master’s degree in two and a half years, when most normally finish in two.

“Unlike studying, games show results quickly enough for me to feel fulfilled,” Park said. “Playing games did obstruct my studies [at first].”

So Park fueled his passion into something practical and developed games that would have real-life benefits for players.

His master’s degree thesis was also related to gaming - expounding on a user-created game (UCG) platform that allows users to make their own games.

However, when he decided to work on games again for his doctoral thesis, those around him tried to persuade him otherwise, claiming it would be difficult for him to obtain a doctoral degree with a thesis on gaming when Kaist’s academic tradition is focused on research.

But Professor Song Jun-hwa, who advised him on his dissertation, was an encouraging force.

“You can get a doctoral degree [researching games],” he told Park, “but only if you focus on how they can have real-life applications.”

In the end, Park’s thesis paper, which also theorized on the development process, received critical acclaim among academics and was awarded several honors for excellence and demonstration.

His research and work also caught the attention of the National Aeronautics and Space Administration (NASA) in the United States, where Park was selected to work as a researcher at its Ames Research Center.

From June, Park will be a part of a team focused on intelligent robotics and human-computer interaction (HCI).

“Gaming is really the field where HCI is most prevalent,” Park said. “I want to continue research in this field to help people in their everyday lives.”