The worst is yet to come

The worst is yet to come 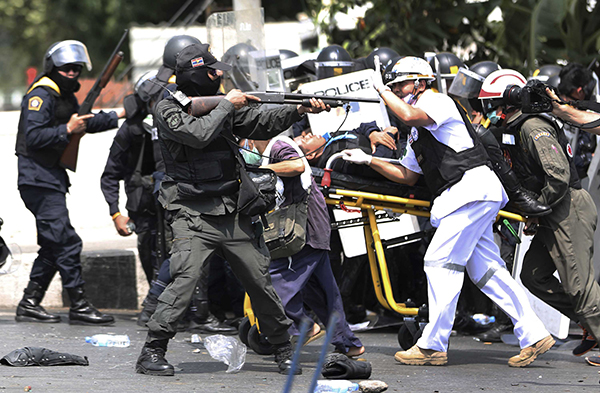 When people talk of the division in Korean politics, they have a tendency to make this country out to be the only one with two opposing groups who can’t stand (let alone understand) each other. Unfortunately, though, the more one travels, the more one sees that extreme and unreasonable division is very common. Korea’s version of the national divide is unfortunate in an absolute sense - but relatively, it is not that bad.

I recently visited Thailand. It is, of course, a beautiful country and probably the easiest place in the world in which to be a tourist. It would be a very simple matter to go there right now and be completely unaware of the ongoing political situation, even though it generates headlines every day; even at the main protest encampments at the busy intersections of Bangkok, there is something approaching a relaxed street-party atmosphere 99 percent of the time. But when you talk to people, you realize quickly that division and hatred have reached frightening levels in Thailand.

The main divide is geographic, and pits Bangkok against the northeast. The history of Thailand is essentially the history of Bangkok expanding outwards, and taking over regional kingdoms. It also has an ethnic aspect, with groups like the Isaan in the northeast having felt marginalized - until Thaksin Shinawatra came along. Thaksin was essentially a political entrepreneur who was able to unleash the latent bloc-voting power of the northeast through (admittedly good) policies like subsidized health care; he then used the victory they gave him to indulge in massive corruption.

According to people I spoke to who support the antigovernment protest, those from the northeast are “mostly uneducated.” When protesters argue against the acceptance of election results, one of the main justifications they use is that Thaksin/Yingluck supporters from the northeast are not worthy of being given a vote, on account of their allegedly poor educational backgrounds. According to a journalist friend of mine, several protesters had told to him that only those with a university degree should be allowed to vote.

This justifies in their mind the blocking of polling stations, and the use of violence to back it up. If you think your opponent is stupid and undeserving of a voice, then it seems neither unfair nor undemocratic to stop him from voting. Protester banners in Bangkok reference the saving of democracy, rather than the removal of it. But they are of course undermining Thai democracy. One counter-demonstration slogan says, “Respect my vote;” it shouldn’t be a lot to ask for. I don’t have to like British Prime Minister David Cameron, but I do have to accept that he is in charge.

The main epithet used against northeasterners in Thailand is “buffalo.” Though I don’t know why, this is apparently an insult. One northeastern friend living in Bangkok told me that her co-workers regularly complain about “red buffaloes,” leaving her feeling left out and angry. She told her mother about this on the phone, and was told, “Well, I’d rather be a red buffalo than a yellow dog!” Yellow is the color of the protesters, though now they have claimed the Thai flag as their own standard and are covering themselves in red, white and blue.

Tragically, red-shirt violence has now also begun. I can scarcely believe that the same street I walked a few days ago has become the site of a bomb attack that killed a child. Thailand is a place where the foreigner walks around completely unaware of what is really going on under the surface - myself included. But as far as the political situation is concerned, that attack surely represents the crossing of a red line.

On my travels, I always asked people the question, “Do you think there could be a civil war in Thailand?” To my surprise, there wasn’t one person who ruled out the possibility. Some thought it likely. Nobody really wants a violent conflict of course, but at this point, there are groups of people divided by region and (to some extent) ethnicity, who already detest each other and are becoming increasingly violent. They are being egged on by TV news propaganda, too, further fueling their hatred of the other side.

One senses that the worst is yet to come.