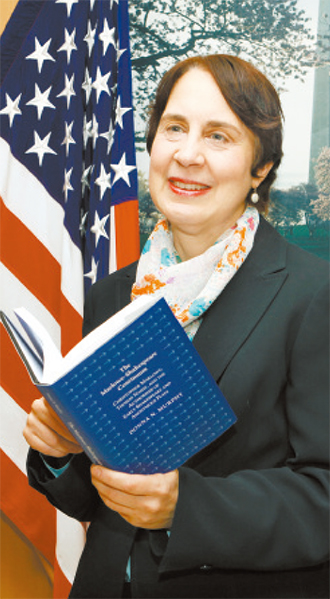 Donna N. Murphy, an economic officer, poses with her new book, which questions the authorship of Shakespeare’s plays, on Tuesday at the U.S. Embassy in Jongno District, central Seoul. By Park Sang-moon

In her newly published book, Donna N. Murphy, an economic officer with the U.S. Embassy in Seoul, tackles a fascinating centuries-old debate on the authorship of William Shakespeare’s greatest plays.

Her work comes after nearly a decade of research on the British dramatist, and despite limited resources on English Renaissance in Korea, Murphy still managed to balance her scholarly pursuits with her day job as a diplomat.

“I couldn’t research here because I didn’t have access to the database,” she explained.

“But I had done the research over a period of years. I was able to take the free time I had and continue to put those bits and pieces together in a way that made sense to me, and hopefully the reader.”

Her 302-page book, “The Marlowe-Shakespeare Continuum: Christopher Marlowe, Thomas Nashe, and the Authorship of Early Shakespeare and Anonymous Plays,” was published in November in the United Kingdom by Cambridge Scholars Publishing. At the heart of it is whether Marlowe, Nashe and other Shakespeare contemporaries were primarily responsible for the plays the world has come to know as Shakespeare’s alone.

“I have a very logical mind,” Murphy said, adding that it made no sense that Shakespeare, this “fellow from Stratford,” an actor from Stratford-upon-Avon and the son of a glovemaker who was born around 1564, was truly the man behind the bulk of those works that are regarded as classics today and mandatory reading in most Western schools.

“Looking at the other [playwrights of the time],” she continued, “the one person who did make sense, however, was Christopher Marlowe because, after all, he was a great playwright and poet, and we already knew that there were many similarities in writing between Shakespeare and Marlowe.”

But Murphy is not alone in her hypothesis. Other scholars have also questioned how a man who allegedly did not possess a university education, had two illiterate daughters and is not known to have ever left the British Isles was capable of writing some of the greatest plays of all time.

In particular, she wondered how a man from such a modest background could be so well versed not only in English and Latin but in Italian, French and Greek, while also being familiar with the geography of Italy - a place he is never known to have visited.

Murphy considered a number of ideas but ultimately “became interested in looking at uncommon linguistic juxtapositions, because that was the most convincing [argument] to me.”

Her book offers numerous linguistic comparisons between Shakespeare’s writing style and other 16th-century playwrights, and argues that Marlowe, along with his colleague and friend, the humorist Thomas Nashe, appear to have penned William Shakespeare’s plays.

She also takes language used in some of Shakespeare’s most popular works - including “The Taming of the Shrew,” “The Tragedy of Julius Caesar” and “Romeo and Juliet” - and compares them to Marlowe’s earlier writing to evidence the strikingly similar linguistic patterns among multiple passages.

Using a database that chronicles early English books online Murphy said she “was able to determine what was [linguistically] common and .?.?. uncommon [at the time].”

For example, “sleep securely,” a phrase that is obsolete now, was common during the Elizabethan era, Murphy said. However, the term “wrath kindled” was found exclusively in works produced by Shakespeare and Marlowe.

“I am an economist .?.?. and economists need to be analytical, and that’s part of our job here at the embassy, too - you have to have an analytical, logically based mind,” she said. “That is why this particular method appealed to me. But the other side that appeals to me is the mystery side.”

Marlowe supposedly died around 1593, just before he was about to be imprisoned and likely executed on charges of heresy, so he had every motivation to take on the mask of Shakespeare, she contended.

Murphy admitted that she’s a morning person, rising at 5 a.m. each day to finish the bulk of her writing before starting her shift at the embassy.

Her family - comprised of diplomats - has also been supportive of her ambitions.

Her husband, also an economist, is a senior adviser to the ambassador, and she has two daughters, aged 28 and 24, who have both visited Seoul from the United States. Her oldest is also preparing for a career in the Foreign Service. Murphy and her husband were previously based in Virginia and came to Korea a little more than two years ago. Before then, they spent several years in Japan.

In her spare time, Murphy is also involved in the Itaewon Toastmasters Club, a group that helps its members to become better communicators, leaders and evaluators. “I wanted to be able to become a fine public speaker when it came to Shakespeare and Marlowe,” she acknowledged.

She has spoken on the subject of Shakespearean authorship at the U.S. Embassy and Toastmasters and hopes to eventually reach out to English professors and students here, who she says she finds most “open-minded.”