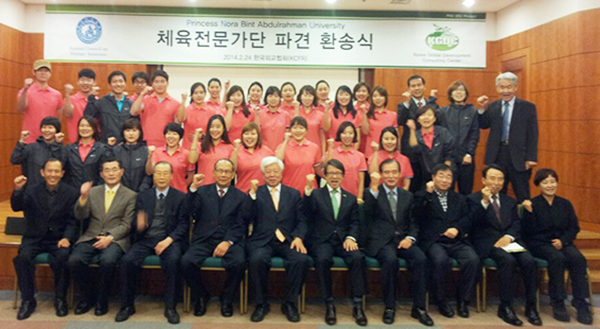 A new era of public diplomacy is blooming between Saudi Arabia and Korea. But this time, in perhaps an unconventional turn, it’s through sports education for college women.

Over the next three years, the Korea Global Development Consulting Center (KGDC), affiliated with the Korean Council on Foreign Relations, will dispatch 40 leaders in physical education to an all-women’s college in Saudi Arabia, part of the nation’s first-ever sports service project aimed at sending experts abroad to teach.

The KGDC, a nonprofit foundation focused on international consulting for development projects as well as education and training, was founded in 2012 under the auspices of the Ministry of Foreign Affairs.

It is still rare to see women actively participate in sports in Saudi Arabia. Under Islamic law, women have traditionally been prohibited from engaging in sports. The Middle Eastern country only just eased restrictions last year, announcing that girls could practice sports, though only at private schools.

“It’s a bit like our situation 80, 100 years ago in yangban society, when it was considered slightly embarrassing to exercise publicly,” KGDC President Rhee Byung-ko told the Korea JoongAng Daily last week, referring to the Joseon Dynasty’s noble class.

PNU has a huge campus, to the point that it needs a monorail to move students; it also has new top-notch physical education facilities, which the school has not been able to use for the past two years, Rhee said.

“They were not considering sports cooperation but came to Korea and saw how active and healthy Korean women were, [and the agreement came around] by chance,” said Rhee, a career diplomat who previously served as ambassador to the Republic of the Sudan and vice president of the Korea International Cooperation Agency, or Koica.

At that time, Rhee added that PNU’s president said that the school was very lucky and happy to have struck the agreement.

“The idea is to maintain health through exercise, and through that, good mental and physical condition,” he said, even for those who are unaccustomed to regular workouts.

They were all required to undergo a screening and interview process, and were given an orientation on Saudi Arabian culture.

The instructors will teach exercises for health and physical training.

“We have a sense of duty to perform this task well, especially since it is something that hasn’t been done before, so that we can continue to follow that path,” Kim Yong-hee, 27, a trainer who specializes in tennis and swimming, told the JoongAng Ilbo.

The opportunity comes at a point when Saudi Arabia, following a post-oil era, is gradually looking to lift restrictions on women’s participation in society, enabling them to become more active and engaged.

“Even from before, through Korean workers’ sweat and tears in construction work in Saudi Arabia years ago, and the introduction of Korean cars and electronics and even Hallyu [the Korean wave], the Saudi people already have a good impression of Korean people, which enabled this cooperation,” Rhee said. “Such a result does not come about suddenly. Rather, it is a sign of our longtime cooperation with Saudi Arabia.”