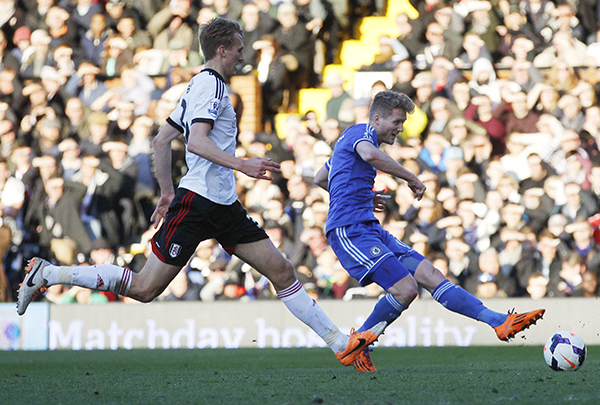 LONDON - Newcastle United manager Alan Pardew was fined and warned by his club after he was sent off for head-butting a Hull City player while Chelsea and Liverpool claimed convincing away wins in the Premier League on Saturday.

Pardew was fined 100,000 pounds ($167,600) and given a formal warning by Newcastle who said his behavior was “unacceptable,” while FA Chairman Greg Dyke said the governing body would investigate the incident.

Pardew was sent to the stands by referee Kevin Friend when he head-butted Hull midfielder David Meyler on the sideline after 72 minutes of Newcastle’s 4-1 win at Hull’s KC Stadium. Pardew is likely to face a hefty FA fine and a touchline ban.

In the title race, Germany international Andre Schurrle scored a hat-trick as leaders Chelsea went four points clear with a 3-1 victory at neighbors Fulham while Liverpool jumped into second spot with a 3-0 win at Southampton.

Brendan Rodgers’ side leapfrogged Arsenal and Manchester City after the Gunners suffered a surprising 1-0 defeat at Stoke City due to a second-half Jon Walters penalty.

Manchester City were without a league match as they play Sunderland in the Capital One (League) Cup final on Sunday.

The results left Chelsea top with 63 points from 28 games, followed by Liverpool on 59 ahead of Arsenal on goal difference.

Fourth-placed City, who have two matches in hand on the clubs above them, have 57 points.

While Schurrle’s Chelsea treble, and goals by Luis Suarez, Raheem Sterling and a Steven Gerrard penalty for Liverpool, will make headlines for the right reasons, Newcastle Manager Pardew’s name will be splashed across the back pages for the wrong ones.

The unsavory incident at Hull began when midfielder Meyler tried to move Pardew, who was standing by the touchline, out of the way to take a quick throw.

Meyler was handed a yellow card for his part in the fracas, which quickly escalated involving a whole host of jostling players and officials.

Pardew, who was fined 20,000 pounds and banned for two matches at the start of last season for shoving an assistant referee, apologized for his behavior on Saturday.

He told Sky Sports: “I will have to sit down from now on because that’s two or three incidents I’ve been involved in.

“I didn’t mean to do anything aggressive, but I did move my head forward and that’s enough. I wouldn’t have got involved if I’d been on the other side of the line. Perhaps it will teach me to sit down.

“It’s a shame because it took the gloss off a fantastic performance from us.”

Dyke, speaking in Zurich after a meeting of the International Football Association Board (IFAB), told reporters he had watched the incident, adding, “I’ve only just seen the clip and clearly it looks serious and we will investigate it.”

“We have held discussions this evening with Alan who has offered his sincere apologies to the club and it is clear he deeply regrets his actions,” said the club.

“His behavior was unacceptable and is not the behavior we expect from the manager of Newcastle United.”

Chelsea Manager Jose Mourinho was also involved in some drama of his own making on Saturday when, by his own admission, for the first time in his managerial career, he did not say a single word to his players at halftime.

Mourinho was so upset by Chelsea’s first-half performance at Craven Cottage against neighbors Fulham that he said he just looked at his team and walked out of the dressing room.

They responded with what he called “probably the best second-half performance of the season,” and kept up their great record at Fulham were they have lost once in 13 league games since the hosts were promoted to the Premier League in 2001.

“At halftime I told them nothing - nothing - not a word. I walked in, then I walked out. The second half was a great reaction to the worst performance of the season,” Mourinho was quoted as saying by the BBC.

“The second half was one of the best performances of the season. We moved the ball around well. If I could have made 11 changes, I might have done, but I could only make three - so I did nothing. Schurrle is cold in front of the goal.

“We have four points more than Arsenal. The gap to Man City is a fake advantage. If they win their games in hand, they’re top of the league. We’re behind them,” he added.

Schurrle scored his three goals in 16 minutes and although John Heitinga pulled one back Fulham remain anchored to the bottom of the table four points from the safety zone.

“It’s a big worry to lose a game like that, it is a massive setback,” Arsenal Manager Arsene Wenger told the BBC.

Liverpool’s title chances got a boost at St Mary’s where they resisted Southampton’s impressive first-half display to keep the pressure on the their rivals at the top.

Suarez opened the scoring with an opportunist strike after 16 minutes for his 24th league goal this season in his 100th league match while Sterling got the second in the 58th after coming off the bench and Gerrard netted a last-minute penalty.

The win avenged the Saints’ 1-0 victory at Anfield earlier in the season, Liverpool’s only home league defeat this term.

Saturday’s other match ended in a 1-0 win for Everton with Chelsea loanee Romelu Lukaku scoring the only goal after being introduced as a substitute following his recent injury layoff.

The win lifted Everton into sixth place above Manchester United who are without a game this weekend.