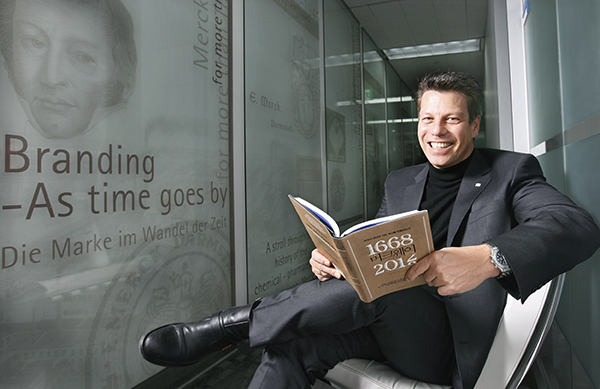 Michael Grund, managing director of Merck Korea, relaxes with a history of the German chemical and pharmaceutical company at his office near Samseong-dong, southern Seoul. By Park Sang-moon

Michael Grund, managing director of Merck Korea, believes the display industry is on the edge of a new age.

“We’re moving out of a silicon age and going to the first age of organic electronics,” Grund said in a recent interview with the Korea JoongAng Daily. He joined Merck Korea, the local affiliate of the German chemical and pharmaceutical giant, last July. “The organic light-emitting diode [OLED] is the first commercial element of organic electronics. But it’s much more than just OLED. We can expect a lot more interesting things.”

Grund shared his views on technological developments seen in the display industry in which Merck has been a leading materials developer and supplier.

Q. Technology advances overnight. What is your outlook on the future display industry?

A. Twelve years ago, there was more or less only the cathode ray tube (CRT) classic television set, and 10 years later these bulky TV sets were replaced almost totally by the flat-panel liquid-crystal display (LCD). Many people think this was only driven by better optical properties like color and flickering, but look at the form factor, which means that by moving to a different technology, designers were able to make flatter and then bigger TV sets, which ultimately led to a totally different user experience.

How could that experience differ for consumers in the future?

If you now just change the picture technology of the flat panel form from one technology [LCD] to the other [OLED], I think the user experience is not very different. But if we experience something different, perhaps some kind of form factor again, it is not only about more color or more resolution [high definition, 4K]. We are moving from breakable devices based on glass or silicon into plastic, organic structures [organic electronics], which offer more features like elasticity or flexibility. That means that not only does the display need to be flexible, but all the other components do, too. By moving from silicon-based systems to organic structures, organic electronics will not replace silicon-based systems but will conquer new applications, new fields that have not been addressed by existing silicon-based technologies so far. 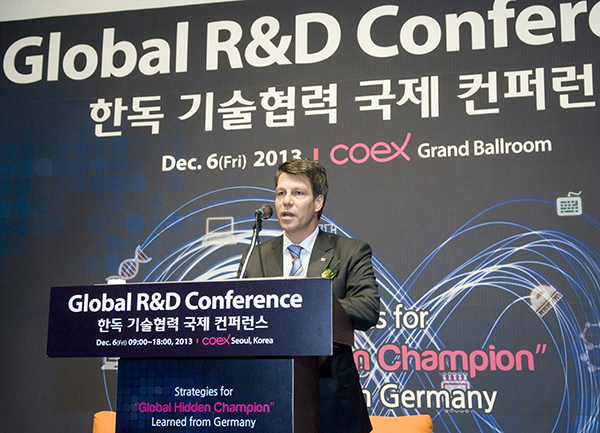 What do you think is the biggest obstacle in mass producing OLED displays?

In the past 10 years there were mainly incremental innovations - small steps in an area we feel comfortable with but based on a single technology: silicon and liquid crystal. There were a lot of changes in technologies also, but all these were based on silicon and liquid crystal. Now, with organic electronics, we are going to totally new principles with totally different materials.

All parts of the supply chain, therefore, have to develop new production and manufacturing technologies for their parts at the same time to realize a working device. This is a big effort, which takes some time and is not comparable to what we experienced in the past. Organic electronics [and OLED is one part] is not a simple replacement or another nice display. It is the first step into a new area of electronics. We are in the very early stage of a long learning curve to penetrate into new areas.

When do you expect the so-called OLED era?

I think organic electronics will find its market. If you are in early and have positioned yourself, you will succeed. It could be in television and traditional displays or some other application, but we do not know today. Personally, I think the game changer will come from a field we do not know now. We are learning from existing technology, the OLED in television, for example. By learning the technologies, new technologies will be developed and new collaboration will lead to innovations. I don’t think, though, that one single company will be able to succeed alone.

We will have to set up the technological infrastructure to do this. And this is the interesting part. Now in Korea you have two major players in the game. More or less everything that is happening in OLED is happening here. And I think the Korean setup - you have panel makers, an electronics industry and you have us who are materials suppliers - is in good shape. There’s critical mass, there’s experience and there’s a market. Korean people are very curious about mobile phones and new-technology gadgets. This setup, you will not find very often. You might find people who are very curious about things, but there’s no technology or infrastructure. Or the other way around. There also are regions with a lot of established technologies, but the people hesitate to adopt new technologies and new gadgets. In Korea, you have both - that’s a nice combination. I think something in this area will happen - if it is in television or the mobile phones we are using today or something else.

What are your thoughts on the emerging technology of N-Screen? (N-Screen is based on cloud computing technology, which involves storing data on a remote server rather than on a specific device.)

That’s nothing new. It is already available as cloud solutions. For example, with iCloud you can experience seamless access to your content on different devices like iPhone, iPad and iMac. This is a cloud solution, which is strongly linked to one company. I think that in the future, cloud solutions will become more open. At the moment, though, we are too focused on single devices like displays or smartphones. Cloud solutions also need a very well-established infrastructure with high data transmission capability. But there’s always the question of data security. If you put data on the cloud, the interesting question is, “Is it safe there?” Easy access is one thing, data security a second thing. But I think it is not a question of whether data security will be a topic. It’s already a hot topic. Some people are more curious about their data than others. There’s also the question of who owns the data and what legislation should be applied to data content. Cloud solutions, or N-Screens, are less a technical question than one of content management and legislation applied to that content.

From left: Grund speaks at a workshop last September hosted by the Korean-German Chamber of Commerce and Industry and the German Society for International Cooperation; Grund attends a networking forum last October; Grund buys Christmas cards at a year-end party hosted by the company, with profits donated to charity. Provided by the company


Would cloud solutions be easier to access in the future?

I think they will be much easier to access. More displays will be installed and seamlessly connected. You might be sitting in a coffee shop and looking out the window, which is also a transparent display. And you just have to log in to check your schedule or messages and do not need a smartphone any longer. The question of data privacy then becomes more important.

As for research and development, in what direction is Merck headed to find new materials?

Merck is a family-owned company based on two big pillars - pharmaceuticals and chemicals. With chemicals, we are positioned in the field of high-value-added materials. These materials are supplied to high-tech industries, where they deliver functionalities that are keys to the performance of a device or a process. Liquid crystals and other display materials, for example, are very complex products. Without these products in a reliable quality it is impossible to produce LCDs. Our R&D is looking for unsolved physical or biological problems. Once we understand these topics in depth, we look for solutions and translate them into molecular solutions. These are the new materials we synthesize and produce in reliable quality. This process takes some time - so we have to think beyond the horizon of today’s technologies to be ready. Somehow, our R&D works today on solutions for the problems of tomorrow.

Samsung is the world’s top smartphone maker. And just recently, they went into biologics. It’s a similar story with LG, as well. This demonstrates their ability to change. Korean companies in general are famous for their strong performance in execution often combined with fast-follower mode. They decide and don’t wait for a long time. They go for it. This pattern worked quite well in building [construction] and electronics. It’s a good track record. So it’s not a matter of principal setup. We’ll see if this formula for success can be extrapolated in the future. 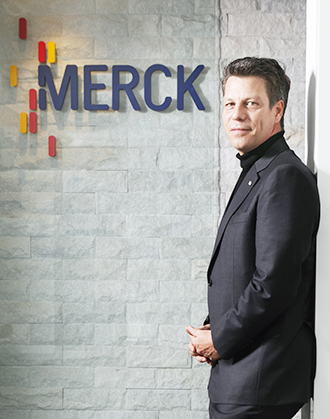 2005 - 8: Vice president of engineering and maintenance at the Gernsheim Site