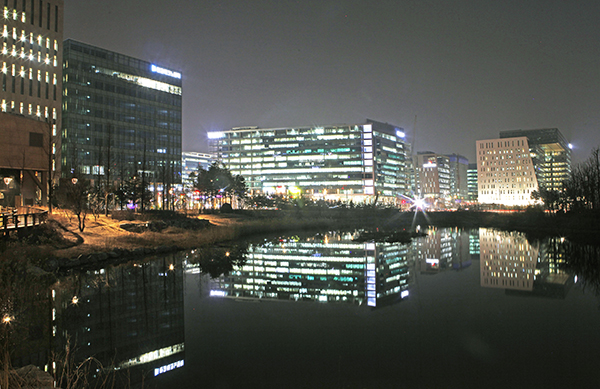 The city of Seongnam is undergoing a transformation as software and IT-related companies from Teheran Valley, or Teheranno, a boulevard that runs from Gangnam Station through Yeoksam-dong to Samseong-dong, move to the Pangyo Techno Valley.

The Gyeonggi Institute of Science and Technology Promotion estimates the 661,925-square-meter (163-acre) complex is home to 700 companies and 38,000 employees.

An estimated 1,000 more businesses will move to the high-tech complex by the end of 2015, and the number of workers is expected to increase to 50,000.

The nation’s leading online game companies have all gathered in Techno Valley. In addition to the four big companies, there is WeMade Entertainment, SmileGate, Webzen, GameHi, XL Games, Bluehole Studio, among others.

About 19 percent of the businesses in the complex are conglomerates, 51 percent are midsize companies and 28 percent are start-ups, according to the institute.

“The annual sales of game companies here is 16 trillion won [$15 billion],” says Hwang Hyun-don, spokesman for NHN Entertainment. “You can say that most of Korea’s games are produced here.”

And more than 90 percent of the companies have located their corporate research centers in Pangyo Techno Valley.

A big draw for high-tech companies in Gyeonggi is cheaper land and rent compared to Gangnam.

“As far as I know, the Seongnam city government provided tax benefits and offered the land at much lower prices to high-tech companies moving into Pangyo,” says Lee Jae-kun, a spokesman for NCSoft.

Another advantage to the location is the new Shinbundang DX subway line connecting Pangyo to Gangnam as well as an outstanding educational and living environment.

“It is only a 10-minute drive from Gangnam. There hasn’t been such a large site for developing an industrial complex near Gangnam, the business center of Seoul,” says a real estate agent in Pangyo.

Game companies say the biggest advantage for them is increased efficiency.

“In the past, our departments and subsidiaries were scattered among different buildings, because the buildings are much smaller and more expensive in Seoul, especially in Gangnam,” said Kim Jin-hee, a spokesperson for Nexon Korea. “Since we moved to the Pangyo complex, all of our departments are in one place and we are now able to hold meetings much more easily, and communication among departments and with subsidiaries has improved.”

The new IT valley is also beneficial for individual content developers.

“Game developers, for instance, when they tried to publish their products or sell their games to large companies, had to travel all around Seoul from Gangnam to Guro and Yeouido. Now they can just come to the tech village and visit many companies in one place,” says Hwang.

Clustering could also encourage companies to cooperate in research and development. “Although there hasn’t been any visible outcome yet in terms of cooperation among game companies, we believe companies here could cooperate and compete at the same time,” said Lee.

Nexon Korea said it has not saved on cost much since moving to Pangyo because it had to invest in new facilities. But the company expects financial benefits in the future.

“In terms of cost-cutting, I do not think the game companies benefitted that much except for securing land at cheaper prices,” said Lee. “Most of the cost comes from labor at game companies and that hasn’t changed much since we moved in here.”

“Under such circumstances, domestic online game companies at the Pangyo Techno Valley would be able to cooperate in developing new games to compete with emerging Chinese game companies,” said an industry source.