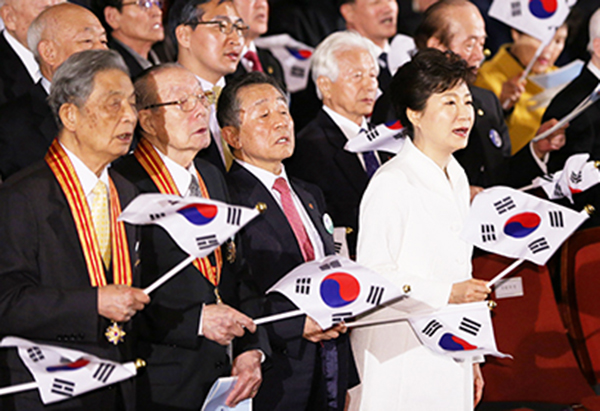 President Park Geun-hye joins in singing a song commemorating the uprising on March 1, 1919, against Japan’s colonial rule, during a ceremony Saturday at Sejong Center for the Performing Arts in Gwanghwamun, central Seoul. [NEWS1]

In response to movement by Tokyo to deny its 1993 apology for forcing women into sexual slavery during World War II, President Park Geun-hye used her March 1 address Saturday to send a strong message to Japan to face up to its history.

“True courage is not denying the past, but looking history square in the face,” said Park in her nationally broadcast address marking the 95th anniversary of the 1919 uprising against Japan’s colonial rule, which lasted from 1910 to 1945.

On Friday, the Japanese government’s top spokesman said Tokyo would re-examine the landmark Kono Statement, which acknowledged and apologized for the physical and psychological damage and indignities suffered by the sexual slaves, commonly known by the euphemism “comfort women.”

During an investigation begun by the Japanese government in December 1991, 16 Korean women testified they were forced to serve as sex slaves to the Japanese military, which led to Kono’s apology.

“The truth in history is the testimony [of those surviving victims],” said Park. “If their voices and testimonies are ignored and not recognized for political reasons, it will only lead to the isolation [of Japan].”

This year’s speech contained stronger criticism of Japan than last year’s March 1 address, and specifically mentioned by name both the Kono Statement and 1995 Murayama Statement, which apologized for Japan’s wartime aggressions.

“Despite the pain of the past, the two countries were able to develop relations because of [Japan’s] promotion of its historical awareness with its repentance for its colonial aggressions, while wishing to look toward the future with a foundation based on its peace Constitution and the Murayama Statement and Kono Statement,” she said.

Shigeru Ishiba, secretary general of the ruling Liberal Democratic Party, said the Japanese government may call upon the Korean women to repeat their testimony, the Kyodo News Agency reported.

And the Korean government plans stronger action, such as raising the issue before the UN Human Rights Council, in response to indications by the Japanese government that it might retract the Kono Statement and other denials of its colonial past.

The Korean Ministry of Foreign Affairs sent Shin Dong-ik, deputy minister for multilateral and global affairs, to raise the comfort women issue during a three-day session of the UN council that gets under way today in Geneva.

China is also expected to respond strongly to Japan’s moves to deny the Kono Statement.

Qin Gang, the Chinese Foreign Ministry spokesman, said Friday that the “forced recruitment of comfort women is a grave crime against humanity committed by Japan’s militarism” and “has inflicted severe physical and mental trauma on the victims, which is hardly healed even to this day.”

In her address, Park held a more optimistic note in regard to Pyongyang, proposing the two Koreas hold regular family reunions.

She also emphasized her unification policy, while urging Pyongyang to give up its nuclear program and “choose a path of joint development and peace.”

Pushing her Eurasia initiative, she said a “unified Korean Peninsula will be a heart of peace linking Eurasia to Northeast Asia.”

Following the first high-level talks in years between the two Koreas last month and reunions of families separated during the 1950-53 Korean War, Japan and North Korea are holding talks through the two countries’ Red Cross chapters that will meet for three days starting today in Shenyang, northeastern China.

The informal talks, which include senior foreign affairs officials from both sides, were proposed through the North Korean Red Cross.

“They are expected to focus mainly on the North’s abduction of Japanese nationals in the 1970s and 1980s and retrieval of the remains of Japanese who died in what is now North Korea around the end of World War II,” said Suga, the Japanese government’s spokesman.

These talks may lead to the resumption of bilateral negotiations between Pyongyang and Tokyo that were suspended in November 2012.