New singles focusing on the quality of their lives

New singles focusing on the quality of their lives 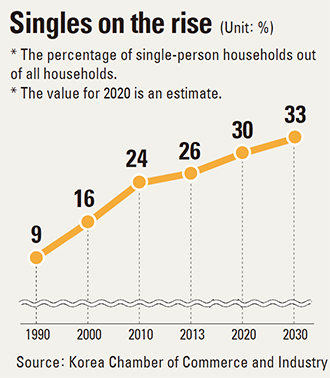 More single Koreans in their 20s and 30s are forging their own path, taking charge of their lives and opting to spend less time cooped up at home.

According to a recently released survey, this demographic - informally known as “premium singles,” based on their fast-paced lifestyles and spending habits - is also taking part in more social activities, preferring to spend their time with other like-minded people.

On Jan. 28, Shin Su-min, a 22-year-old who lives alone in Seoul, attended a Lunar New Year’s Eve party held at Shinpung Market in Yeongdeungpo District, western Seoul. The event, for those who didn’t want to see the holiday quietly pass by, was hosted by Park Mi-na, 27, the head of a company that frequently holds volunteer opportunities and outings for single people.

About 20 attendees, including Shin and Park, had tteokguk, a traditional dish eaten on New Year’s Day, and watched a live band performance and a movie before going for drinks at the traditional market.

“I didn’t want to spend the holiday alone anymore,” Park said. “Even though I live alone, I wanted to gather everyone who likes to meet other people and enjoy their lives.”

Another single man, surnamed Lee, spends nearly half of his income on hobbies and leisure. The 32-year-old collects Gundam action figures and other anime products.

He also enjoys buying and collecting electronic appliances. Lee’s apartment is equipped with a home-theater system, with a 42-inch LED TV, and he frequently travels to other countries on the weekends.

Similarly, Lim Jeong-jin, 25, also isn’t stingy when it comes to treating herself. She spends more than half of her monthly wages on hair products and cosmetics.

According to the survey, conducted on Jan. 8 by Incruit, a job-market portal, the lifestyles of the 476 single respondents were apparently not much different from families of two or more.

Their eating habits also deviated from prevailing perceptions. Asked how often they had meals alone, the most frequent answer, with 26 percent, was three to five times a week.

Those who live alone with pets accounted for 10 percent of those polled.

“Today’s single people place more importance on their quality of life and actively participate in social activities without feeling lonely,” Incruit concluded from its results. 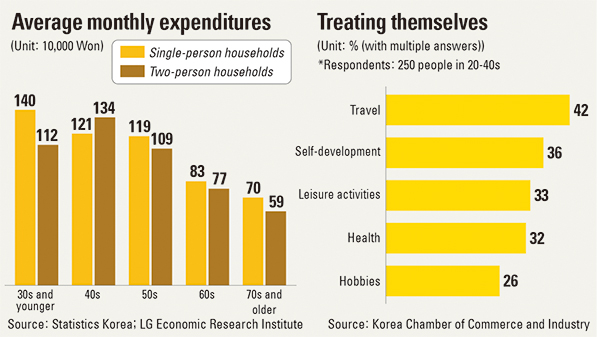 But the behavior of so-called premium singles isn’t necessarily a new phenomenon, experts contend. The traits among this demographic actually vary across age groups.

“Single people in their 40s shrink their spending to prepare for their later life, since it is more likely that they will live alone afterward,” said Ko Ga-young, a senior fellow at the LG Ecomonic Research Institute (LGERI).

“But the singles in their 20s and 30s tend to spend extravagantly.”

Premium singles are mostly in this latter age bracket, according to research. A recent report released by the LGERI shows that single-person households are most prevalent among those in their 20s and 30s. On average, their monthly expenditure put toward personal consumption was 1.4 million won ($1,305), the largest among all age groups.

However, strong purchasing power isn’t the only commonality among premium singles.

They also tend to spend money on cultural activities and art, and share their interests with others, even when it puts a strain on their wallets. The website Zipbob, for instance, opened last April for those who prefer to not eat alone. Since then, it has evolved into a place for singles to organize get-togethers for various purposes, like watching performances, going to exhibitions or volunteering. So far, there have been nearly 2,000 meeting, with more than 80 taking place every week across 16 cities nationwide.

“Premium singles are forming new types of families and interacting with the society in a new way,” said Professor Youm Yoo-sik, in the sociology department at Yonsei University.

“But,” he added, “[if they’re not careful] they could face financial difficulties as they get older since the welfare system for the elderly is not well-established in Korea.”