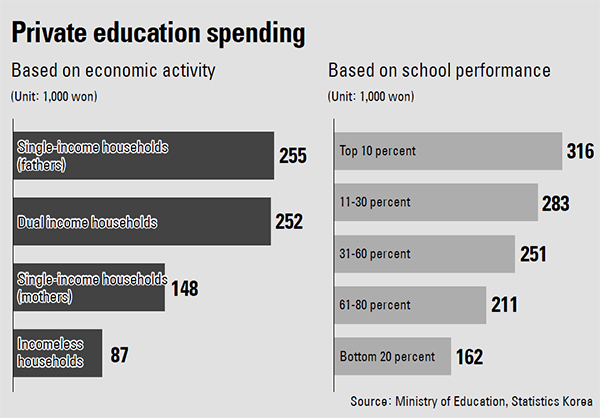 That’s the first time in four years that private education spending has gone up, according to a comprehensive and nationwide survey of 78,000 primary, middle and high school students and their parents, conducted jointly by the Ministry of Education and Statistics Korea.

The slight increase indicates that the government’s efforts to reduce the reliance on private education spending - which has included banning cram schools, or hagwon, from operating after 10 p.m. and cracking down on private tutoring - has had little impact.

Worldwide, Koreans are the second-highest spenders per capita on private education, accounting for 8 percent of the gross domestic product, according to data compiled by the Organization for Economic Cooperation and Development.

Analysts attributed the decline in overall spending to the lowering birthrate and reduction in the number of students in Korea.

Koreans spend the most money on English lessons, to the tune of 81,000 won per month on average.

In addition, the higher a student’s academic performance, the more the student’s parents tend to spend on private tutoring.

Those numbers have raised concerns that parents’ ability to pay for private education could be determining how well students perform at school.

Private education spending was the highest in single-income households in which the father was the sole salary earner, at 255,000 won.

Single-income households in which the mother was the only breadwinner were much further behind, spending just 148,000 won per month per student.

Even families without any wage-earners still managed to spend an average of 88,000 won per student per month.

The rate of students who attend private schools was 68.8 percent last year, down 0.6 percent from the previous year.

When asked about the purpose of extra schooling, 44.3 percent of respondents said that it was intended to make up for regular classes.

Twenty-five percent said that its purpose was for advance study, while 10.8 percent of respondents cited their anxieties about the future as the reason for signing up for after-school lessons.