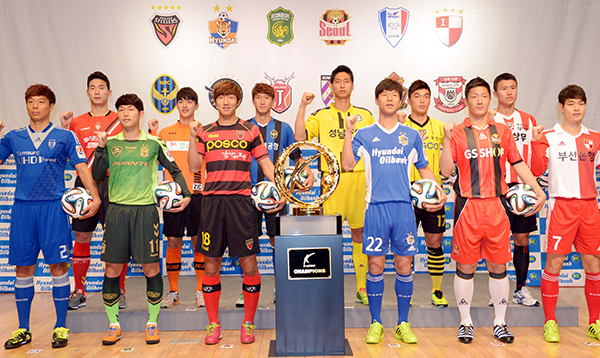 Korean league football, or the K-League Classic, will kick off its 2014 season on Saturday at 2 p.m. with an opening match between defending champion Pohang Steelers and runner-up Ulsan Hyundai Tigers at Pohang Steelyard.

During the eight-month season that continues until Nov. 30, 12 clubs will play 288 matches in 38 rounds.

Analysts predict that four clubs - the Jeonbuk Hyundai Motors, FC Seoul, the Steelers and the Tigers - will be the strongest contenders for the season title and the teams most likely to compete in the Asia Champions League.

Though last season’s trophy was claimed by the Steelers, the Jeonbuk Motors, led by former Korean national team coach Choi Kang-hee, is predicted to claim this season’s title after it landed several decent players during the offseason. The club signed 37-year-old free agent veteran defensive midfielder Kim Nam-il, who was a key member of Guus Hiddink’s Korean national team in the 2002 Korea-Japan World Cup, in which the country finished in fourth place. The club didn’t reveal details of the signing, but sources said the veteran agreed to a one-year deal in January. Kim will replace veteran Kim Sang-sik, 38, who retired after last season. The club also added young attackers, acquiring forward Han Kyo-won, 24, from Incheon United FC, attacking midfielder Lee Seung-ryeol, 25, midfielder Kim In-sung from Seongnam Ilhwa Chunma FC, and defensive midfielder Choi Bo-kyung from the Tigers. Details of the terms weren’t announced, but sources say the club spent about 13 billion won ($12.1 million) to acquire the four young players. Analysts say wingers like Han and Lee will bring more speed, which the club needs.

“I think our roster now has more depth compared to last season,” coach Choi said yesterday. “Our goal is, of course, winning the league title and to claim a spot to compete in the champions’ league. Since it is a long season, we will try our best to make our players stay away from injuries.”

Analyst Han Jun-jee said, “I think those new young faces [Han and Lee] will create a nice combination in attacking with veteran striker Lee Dong-gook this season for sure.”

Club captain Lee scored 13 goals in 30 matches last season, but minor calf pain forced him to miss the 2014 AFC champions league Group G first leg match against Japan’s Yokohama F. Marinos last week, which the club won, 3-0. However, coach Choi said Lee is set to play in the season-opening match against Busan I-Park, which will be held at 4 p.m. on Saturday.

The Tigers and FC Seoul are expected to challenge Jeonbuk’s dominance. In the offseason, the Tigers’ biggest move was signing K-League rookie coach Cho Min-kuk. Last season, the club was led by Kim Ho-gon, but the 62-year-old resigned from the post a day after the team lost to the Steelers in the last match of the season. Before that match, the Steelers were trailing the league-leading Tigers by two points, but the Tigers lost the match, 1-0, on a goal by Steelers’ defender Kim Won-il in the 95th minute. The Tigers led the league nearly all season but failed to clinch the regular season for the first time in eight years after losing its last two matches.

However, the club kept its key players, including the 196-centimeter-tall (6-foot-5) striker Kim Shin-wook, who shared the league lead in scoring with 19 goals with Dejan Damjanovic, who moved from FC Seoul to a Chinese team during the offseason.

FC Seoul lost some of its key players, including Dejan, Brazilian striker Adilson dos Santos, 37, who retired, and midfielder Ha Dae-sung, who moved to a Chinese team. But it added veteran wing-back Cha Du-ri to pair with Kim Chi-woo, 31. Young players, including Yoon Il-rok, Ko Yo-han and Spanish forward Sergio Escudero, will be expected to score many goals.

The Steelers, who won the league without any foreign players, didn’t add any of them during the offseason. Just like last season, their best weapon is team play, but the question is who will score for the club. They decided not to re-sign veteran forward No Byung-jun, 35, and forward Park Sung-ho, 32, who moved to Japan’s Yokohama FC in January.

Analysts say Jeju United, the Chunnam Dragons, the Suwon Bluewings and Incheon United will be in the middle ranks and Busan I-Park, Seongnam FC and Gyeongnam FC will remain in the lower ranks.