An alarming merger of cars and IT

An alarming merger of cars and IT 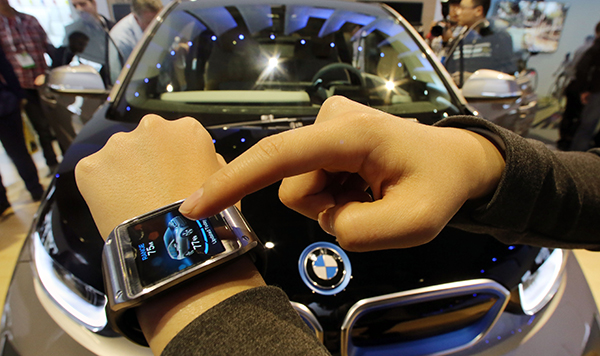 With Samsung’s Galaxy Gear, users can send navigation and Internet information, adjust temperature and customize a BMW i3 electric car remotely. Provided by the company

The face of Kim Do-hoon, head of the state-funded Korea Institute for Industrial Economics and Trade, was flushed with excitement and astonishment as he spoke about his visit to the world’s biggest electronics trade show in Las Vegas in January. “Tremendous changes are coming our way,” cried Kim.

The International Consumer Electronics Show brings together the latest, coolest and often most sensational gadgets and technology phenomena every year.

But it wasn’t the Korean curved display screens or China’s strides in the high-end technology industry that was the talk of the town. What impressed him the most was Samsung Electronics’ partnership with BMW. By using the Galaxy Gear on his wrist, a driver was able to send navigation and Internet information, adjust the temperature and remotely customize his BMW’s i3 electric car.

The transition of software has made interactivity of smart and car technology possible. At the same time, it indicates a showdown between the IT and car manufacturing industries.

Electric car producer Tesla Motors is the highest-flying stock and the biggest thing in the automotive world. The company’s share prices last year jumped five-fold and gained 70 percent in the first two months of the year. Even its battery glitches could not stop its rally. The company, which has never recorded a surplus since its founding in 2003 and sells just 23,000 battery-powered sedans a year, has a market capitalization of $31 billion, nearly half as big as General Motors, which turns out 10 million vehicles a year.

Tesla has become the new Apple, an icon of innovation in the automotive world. The company, which announced plans to build the world’s largest low-cost battery plant, could change the automotive landscape and the global electric utility market. It focused on the development of energy-saving and low-cost technology. There were electric cars earlier, but Tesla went further. The sleek and glittering luxury sports car was actually an electric grid of lithium-ion batteries - each car is capable of storing enough energy to power the average house for more than three days - that will be significantly cheaper to buy and maintain once it runs its own grid factory.

Electric apparatus and parts are 40 percent of the cost of producing a car, nearly double what they were 10 years ago. Some worry about safety due to over-reliance on IT.

But the future lies in interactivity, connectivity and automation. Among high-end car models of more than 100 million won ($93,458), electronics accounts for more than 50 percent of the cost. The share is 60 percent for hybrids and 70 percent in electric cars.

In his review of the Consumer Electronics Show, Stephen Hwang, president of UL Korea - the Korean branch of Underwriters Laboratories, an industrial product safety testing and certification organization - said Hyundai Motor should fear Samsung Electronics and LG Chem, not Toyota and Volkswagen.

Former mobile phone giants had been ambushed and wiped out by Apple, not by traditional insiders like Nokia. Over the past century, car manufacturers focused on machinery engineering to upgrade fuel and efficiency. But over the next 100 years, they will likely vie over IT capability and batteries. Samsung Electronics has the edge in sensors and navigation technologies and LG in cell batteries.

Automobiles so far have been commuting vehicles. The GSMA, an association of global mobile operators, envisions an entirely new role for cars in a smart city when mobile technology is embedded into every vehicle. Cars no longer will serve only as a means of transportation. Mobile and information technology will morph cars into a moving information-packed grid equipped with emergency and convenience services. Operation systems integrated with customized solutions are currently under development for commercialization.

Who gets ahead in the connectivity market will determine the future of the new industrial world. Google purchased eight robotics and artificial intelligence start-up companies in the United States and Japan, envisioning the day when a robot-driven automated car will deliver its packages. Amazon invested in unmanned drones that might someday drop packages on our doorsteps. When these days arrive, Samsung Electronics and Hyundai Motor may line up behind them with other rivals to vie for parts and vehicle orders from these Internet companies. Millions of bus, taxi, truck and delivery drivers will be out of work.

While curved displays and wearable gadgets wowed the media and tech-savvy people around the world at CES, industry watchers saw an entirely new industrial age in the making. The IT sector has been bred on speed and fierce competition. Internet leaders like Google and Amazon that have survived and thrived are breaking down industrial barriers and making inroads into the vehicle sector. “Forget Apple, forget Facebook and watch out for Google and Amazon,” said Business Insider.