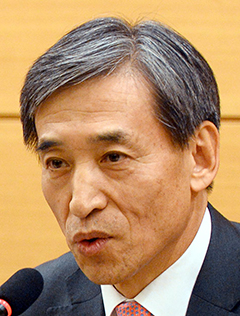 Much to the market’s surprise, the Blue House yesterday nominated Lee Ju-yeol, a former Bank of Korea senior deputy governor, to head the central bank.

Lee will succeed Kim Choong-soo, whose term ends this month, if his nomination passes muster in the National Assembly, where confirmation hearings could begin as soon as this week.

“Lee is a traditional Bank of Korea employee with 35 years of experience in major positions and therefore has keen insight on the workings of a central bank,” said Blue House spokesman Min Kyung-wook. “As his resume shows, not only is Lee equipped with [sharp] senses and judgment on international finance, he has strong support within the organization due to his rational thinking and modesty.”

“More than that, I feel a heavy responsibility.”

The Blue House noted that the next central bank governor, unlike Kim, who came from the state-run think tank, served at the bank from 1977-2012. Since then, he has been teaching at the graduate school of his alma mater, Yonsei University.

Earlier this year, Lee was considered a contender for the position by market experts. Yet the possibility of the Blue House naming the former BOK second in command seemed slim, as other high-profile potential candidates included Princeton professor and economist Shin Hyun-song and Kim Kwang-doo, President Park Geun-hye’s close economic aide and a professor at the president’s alma mater, Sogang University.

Like other high-level government positions, there was speculation the central bank governorship would go to someone in Park’s inner circle or a politician from the ruling party.

Most of all, the market was betting the next central bank chief would be dovish with a pro-growth attitude. Lee is known mostly as a middle-of-the-roader who sometimes leans slightly toward hawkish stances that emphasize stabilizing inflation over economic growth.

In his retirement address in April 2012, he strongly criticized the direction of policy and BOK management under Kim. The outgoing deputy governor said he felt a heavy responsibility as a member of the monetary policy committee for failing to properly tackle rising inflation.

There was market pressure on the central bank to tighten monetary policy on the back of rapidly rising inflation, which surged past 5 percent in late 2011. Yet Kim, in support of the Lee Myung-bak administration’s pro-growth strategy, kept the benchmark interest rate low.

Lee also criticized Kim for tarnishing the reputation and trust of the central bank, saying the organization’s value and regulations built over 60 years had suffered in the name of “globalization” and “reform.”

“It seems like the Blue House has nominated Lee as a safe bet,” said an industry insider who requested anonymity.

“First, Lee is not in Park’s inner circle and, furthermore, he is a former BOK official, which gives lawmakers from the opposition party no reason to oppose his nomination.”

“The nomination is welcome in the sense that a former BOK official who knows the work inside and out has been selected,” said a BOK employee, who requested anonymity. “Whether Lee does his job well and communicates with the market better is something we need to see in the future.”

Since the beginning of his term, the outgoing governor has often been accused of miscommunication and misguided signals that confused the market. Kim, however, has refuted such criticism.

Nonetheless, one of the biggest challenges for the new governor will be to rebuild market confidence.

Meanwhile, Kim seems to be at odds with the Blue House and may tighten the benchmark interest rate at his final monetary committee meeting later this month.

On Friday, the BOK governor met with local economists, saying Korea should go along with the rest of the world in normalizing the monetary policy.

“In the past, each country faced with a global economic crisis tried to overcome the situation using untraditional means,” the governor said. “But now they are heading in the direction of normalization. I believe our economy would see desirable results when we, too, follow the global trend.”

He added that because everyone lives in the global economy, policy cooperation is essential.

The central bank has kept monetary policy loose for nine consecutive months to contribute to the Park administration’s push for an economic recovery. Most market participants have projected that with only a month left, Kim will likely maintain the key rate.