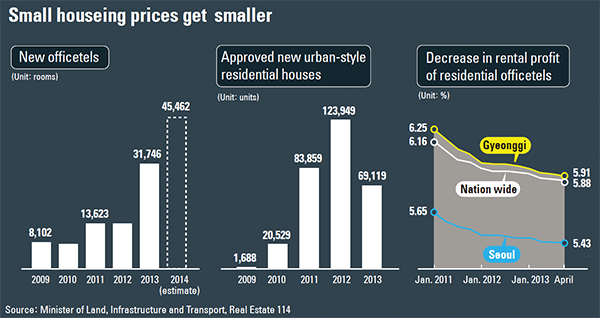 A 36-year-old resident of Dongjak, Seoul, surnamed Lee, is having trouble sleeping these days. Lee is worried because he may have to start paying taxes on the rent he receives from two small houses he bought as an investment two years ago.

Legislation introduced last Wednesday in the National Assembly would require Lee to report his rental income to the government if a tenant claims a tax credit for the rent paid. “The number of small houses in the market is increasing, so rents are decreasing,” said Lee. “There would be practically no profit after paying the taxes. I am thinking of selling them.”

An investment craze in small houses occurred three to four years ago on the expectation that leases from small urban units would generate tidy profits for landlords.

People in their 20s and 30s, and those ready to retire, borrowed to invest in rental units. 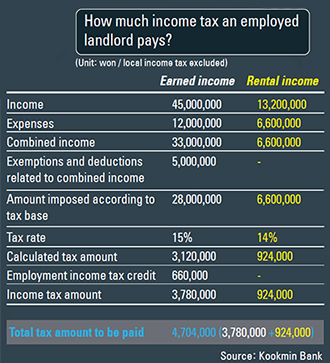 Of those who purchased units in the Prugio City officetels in Gwanggyo, Suwon, and near Ewha Womans University, half were in their 30s and 40s. They were all looking forward to a second income.

Investors who own one or two units don’t usually report their rental income, but if the measure introduced last week is approved, that income would be subject to taxation.

For example, Lee, an online security company worker, currently pays 3.78 million won ($3,529) in taxes on his annual income of 45 million won. If the measure becomes law, his tax bill would increase to 4.7 million won.

For small urban properties, the rental profit rate was 4.3 percent at the end of last year for 60,862 properties surveyed by FR Investment.

Industry experts are concerned that if rental income is taxed, landlords will sell their small investment properties and prices will fall.

“Considering that the after-tax rental profit rate is 3 percent annually, some might convert their monthly rent to jeonse or sell them off,” said a real estate agent who wished to remain anonymous. “Accordingly, sale prices may plummet.”

Excessive supplies of small housing units were, in part, encouraged by the government, which in 2009 began to ease regulations on single-unit housing and small houses to bring down jeonse prices. The government also approved floor heating in officetels in 2010.

Some investors said that, although they trusted government policies and made their investments accordingly, all they have left is a loss.