To March 16: This is a retrospective of Park Soo-keun (1914-65), one of Korea’s most beloved modern artists, to celebrate the 100th year since his birth. It is the largest-ever exhibition of the painter, according to Gana Art.

About 120 works by Park, including oils, watercolors and drawings, are on display.

To March 16: This is a retrospective of renowned Spanish designer Javier Mariscal, who created the mascot “Cobi” for the 1992 Barcelona Summer Olympics. The exhibition presents 1,200 pieces, including furniture, interior design, sculptures, drawings and other works in three rooms, with the themes of “Sketches,” “Collage Landscape” and “Colors Parade.” 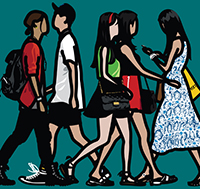 To March 23: This is a solo show of the works of British artist Julian Opie, who is well known for his simplified human figures, edged with bold black lines and full of dynamism.

The exhibition includes several paintings depicting the images of contemporary people walking on the streets of Seoul. The works depict in vivid colors men and women viewed from the side, walking through Sinsa-dong and Sadang-dong.

They include not only popular artists like Kim Whan-ki and Park Soo-keun, but also artists who have been forgotten amid the turmoil of modern Korean history.

Admission is 6,000 won for adults, which covers the admission to the palace.

To March 31: This is a solo show for the young painter Yim Ju-youn.