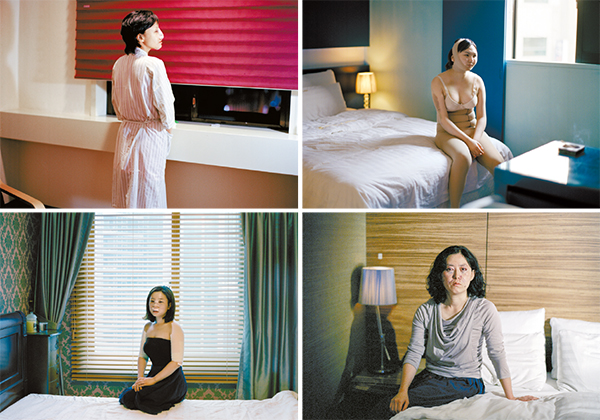 In the “Beauty Recovery Room” project, photographer Yeo Ji took portraits of Korean women right after their cosmetic surgery procedures were completed. Provided by the photographer

Yeo Ji, a 29-year-old New York-based rising photographer, had two dreams when she was young: getting into a prestigious university and going under the knife to become someone else.

Her first dream was realized when she got into Seoul National University. She later earned a master’s degree in photography at the Rhode Island School of Design.

To fulfill her second dream, she began combing through web forums dedicated to plastic surgery, narrowing the number of eligible surgeons to 12. She visited 12 clinics in six months and asked the surgeons how they could give her a brand-new look. She was planning to have a nose job, eye surgery and full-body liposuction.

After her visit to the 12th surgeon, however, she had a change of heart and was able to discover her inner self.

“I realized that if I really wanted to get plastic surgery, I would have done it already,” Yeo said during a recent interview with the Korea JoongAng Daily.

Yeo has been obsessed with plastic surgery ever since she was a middle school student - and like most Koreans, she is constantly bombarded by images of made-over women. But her visits to the clinics caused her to see things from another perspective. Thus was born her project “Beauty Recovery Room,” a series of photographs that capture the faces and bodies of Korean women in the recovery rooms of plastic surgery clinics, complete with stitches, scars and bruises.

For her subjects, Yeo needed women who were willing to be photographed right after their procedures. In exchange, she promised to happily become their maid. And she did. She ran errands for them, made soup for them and even paid for their hotel rooms. She also took photos of them in bandages soaked with bloodstains, which is the grim reality of plastic surgery.

Although the project began because of Yeo’s issues with her body image, a series of her chilling photos gained the attention of international media outlets such as Germany’s Der Spiegel, England’s Daily Mail and Marie Claire Brazil.

The “Beauty Recovery Room” project is now in Seoul, part of the “Pause & Pose” exhibition at Space 22 in Gangnam District, southern Seoul. Although the project was shown here twice before, it hasn’t drawn as much attention as it often does overseas. When asked why, Yeo said with a hearty laugh, “Maybe because it’s too much of reality. Maybe it’s hard to confront.” 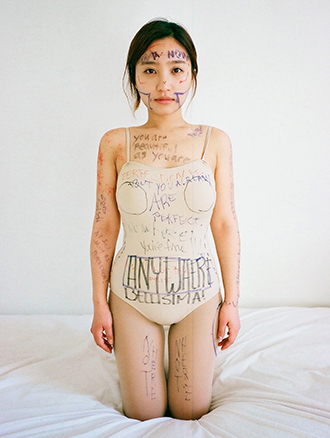 In an April 2011 performance, Yeo held a picket that read, “I want to be perfect. Draw on me.” at Francis William Bird Park in Walpole, Massachusetts. “I felt like just hiding behind the camera felt a little bit uncomfortable. I wanted to be part of it,” she said.

Q. Plastic surgery is not something new in Korea. We talk about it and hear about it almost every day. We are quite immune to it. What kind of reaction do you expect from the Korean audience?

A. I was expecting Korean women to not react that much or be shocked by the images, but they were surprised, even though they are familiar with plastic surgery. I was also shocked by their reaction. There’s a difference between foreign and Korean audiences, though. A lot of Koreans are shocked, but the time period is short. Right after they get used to these images, they try to figure out what those women had done. They take their time looking at the photos and figuring it out like doctors do. Foreign audiences are just shocked. Koreans understand the women in my images, but foreign audiences have a hard time understanding why they have done that. They think these women look beautiful as they are. Most Korean women make their eyes bigger or they want larger breasts, a higher nose or narrow chin, which are mostly like Caucasian people. And that’s what Caucasians don’t understand. They say, why do Asians want to get rid of Asian features?

Everyone wants to be beautiful. It’s a basic human instinct. But not everyone plans for head-to-toe plastic surgery. Why did you want it for so long?

I had severe body image issues. [When] I lived in San Francisco when I was in the fifth and sixth grades, I was so liberal. I played soccer, baseball and basketball. [Nobody told me] girls have to behave this way. Right after San Francisco, I moved back to Korea and I got into a girl’s middle school. I had huge culture shock. When I got into middle school, there were more than 1,000 girls talking about their appearances. And the pretty ones were the most popular. There was a lot of sexual harassment among the male teachers. They touched breasts and some pinched underneath the arms, poked breasts and they made girls dance in front of them when they were wearing summer uniforms, which are pretty light. Male teachers preferred pretty girls. They gave them good grades. I was short, pretty chubby and not pretty enough. And similar things had happened in high school. Everything revolved around appearances. I guess that’s why I always didn’t like myself.

So, you’ve visited 12 surgeons. What was the experience like?

The reason I went to 12 surgeons was because I couldn’t trust them. The more consultations I had, the more I got confused. I asked about my eyes, nose and liposuction and everyone said different things. Every surgeon had different styles and none of them told me what the recovery was like. The common thing was, “Oh, this is pretty natural and easy. You will be totally fine after three days. You can go back to work without any problem.” None of them clearly explained about side effects. And there was always a blind spot that I couldn’t really know. I think a lot people just go to one or two surgeons and decide right away. They are smart, they don’t get confused. [Laughs]

When did you think of the “Beauty Recovery Room” project?

After I talked to the 12th surgeon, I realized that if I really wanted to get plastic surgery, I would have done it already, but I realized maybe it’s not me wanting to have plastic surgery but maybe it’s others that want me to have plastic surgery. I was really afraid of surgery itself. The other thing was, what if I can’t go back? What if I lose my face, figures or features that I already have? I didn’t want to change. And that’s when I decided to make it a project, revealing portraits of current Korean women.

In order to find women, you uploaded a post on one Web forum and explained your project. How many women contacted you? Did you have your own criteria when choosing your subjects?

I didn’t have any choice. Finding a woman who’s willing to stand in front of a camera right after surgery was very rare. And I was kicked out of the forum several times. They say I’m crazy. I was banned from approaching the forum. I think I made five [different] IDs. [Laughs]

People usually want to keep it a secret that they have gone through plastic surgery. But you were there to capture those secretive moments. How did it feel?

I was shocked by their comments and their behavior toward plastic surgery. Many of them were planning for their next surgery. There was a woman who borrowed money for her breast enlargement from a nonbanking financial institution. She examined her breasts to make sure they were healthy, but she found seven or eight cysts. It wasn’t serious, but she needed to get rid of them in order to get the breast surgery. So I thought she was not going to do it. But she did a nose job and a chin implant, even though she wasn’t planning to. Over time, I got used to their notions and their attitudes toward plastic surgery. I don’t think I’m scared of plastic surgery anymore. Now, I accept it more naturally and I have a higher understanding of the psychology of women and medical procedures.

Does it mean that you are free from any desire for cosmetic surgery?

Even after long years of studies and developing my confidence [through the project], it’s a constant battle. Sometimes I think I should get liposuction or make my chin narrow.

Your other projects are also about women who have body image issues, such as eating disorders. Why are you always drawn to such topics?

I think I am drawn to people who have body image issues. I see myself in them. It’s all psychology issues. It’s all in their head and mind. I shot two people within the same series [of the “Beauty Recovery Room”] this time, too. I just can’t stop doing it. By doing the project, I constantly become a third person when I look at the plastic surgeries. I also project myself into them.

Tell us more about your other project, “Somewhere on the Path: I See You.”

I went to an eating disorder support group once a week for two years. And I realized that with most people who have eating disorders, it’s not about eating, but it’s all about psychological issues. Most of them have had traumas in their early lives, most of them have heavy depression and most of them didn’t have any friends. And one day, one of my close friends, who is also a subject of the project, tried to commit suicide in the middle of the project. I called 911, and it was a very traumatic experience. I realized I need to get away from it in order to survive. I need to go somewhere extremely different and opposite. So I flew to Los Angeles and began looking for aspiring actresses.

It seems like there is no link between women who suffer from eating disorders and aspiring actresses.

Women who have eating disorders don’t want to be represented by any means. They don’t easily look at mirrors. They don’t like to see themselves. These actresses are the opposite. They will do anything to be famous. The common thing is that they know about their bodies and they are obsessed with their appearances. So I mixed all the photos [of the two groups] without revealing who’s who. It’s a kind of guessing game. Most of the people with eating disorders look normal.

You said the “Beauty Recovery Room” project has helped you gain confidence, but you didn’t want us to take a photo of you. Why?

I hate being judged or assumed by other people, especially by anonymous people. I guess people judge by appearance…I don’t think my look transforms who I am.