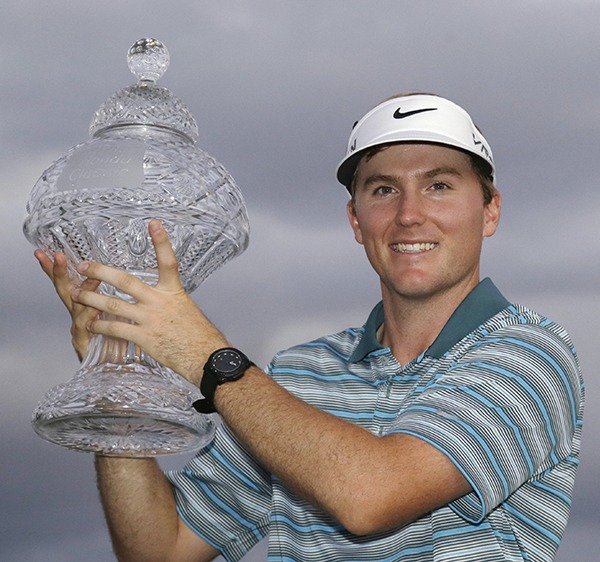 American Russell Henley emerged as the last man standing to win his second PGA Tour title in a four-way playoff for the Honda Classic at Palm Beach Gardens in Florida on Sunday.

McIlroy surrendered a big lead with an error-strewn 74 in the final round, though he made a birdie at the 72nd hole to qualify for the playoff after hitting a superb second shot to 11 feet, only to miss the eagle putt.

Henley (72), Palmer (69) and Knox (71) also made mistakes over the closing stretch to finish level with McIlroy at eight-under-par 272.

Henley sounded as if he was still in shock as he spoke of his victory.

“I hope I can have a bunch more Sundays just like that in my career,” he told Golf Channel. “It was a rush to be out there playing with Rory and the crowd.

“I’ve never been part of a crowd so big cheering for me. It was an amazing feeling. It was so much fun.”

Henley appeared to have thrown away a chance of winning when he dunked his six-iron into the water at the par-three 15th for a double-bogey.

But he steadied his apparently sinking ship with pars on the final three holes, which was enough to make the playoff.

“I was so nervous coming down the stretch,” said Henley, who won his maiden PGA Tour title at last year’s Sony Open in Hawaii. “Just hanging in there and trying to enjoy every step.”

Henley was not the only one to feel nervous. None of the four players who made the playoff negotiated the difficult back nine in less than 37 strokes as a firm course and the pressure affected all the contenders.

Palmer had the best chance to win in regulation, but he missed a five-footer for par at the 72nd hole.

McIlroy, however, had even more to rue. The double-major champion led by three strokes after six holes but played the next 11 in six over as his swing deserted him and he pulled a series of shots well left.

“Seventy-four today wasn’t good enough today to get the job done,” a stunned-looking McIlroy told NBC. “Even if I had won it would have felt a little bit underserved. If I had won today, I would have counted myself very lucky.”

A double-bogey at the par-four 16th was the Northern Irishman’s undoing. After yanking his drive into a fairway bunker, he hit a six-iron fat and came up short in the water in front of the green.

“It’s a good finish, second runner-up of the season, but obviously it’s going to be hard to get over because I had a great chance to win my first tournament of the season and I didn’t,” he said.

Four weeks ago, McIlroy had a similar but less dramatic fade during the final round of the European Tour’s Dubai Desert Classic.