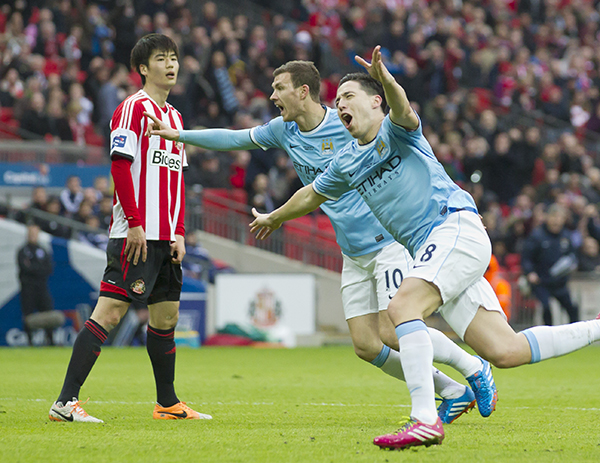 An exquisite equalizer from Yaya Toure sparked a second-half comeback by Manchester City in the League Cup final on Sunday, with a 3-1 victory over Sunderland giving Manuel Pellegrini his first trophy as manager.

Returning to the stadium where Roberto Mancini’s City career ended in an FA Cup final loss in May, further Wembley misery appeared to be beckoning when Fabio Borini put Premier League struggler Sunderland in front after 10 minutes.

Instead, City, which has now scored 121 goals this season, remains on course for an improbable quadruple that would require all the resolve displayed in the second half to complete.

After a flat first-half performance, the recovery began after Toure nonchalantly curled into the net from 30 meters in the 55th minute, with Samir Nasri volleying home City’s second inside two minutes.

City fans were already celebrating just their third trophy in three years - following a 35-year title drought - when Jesus Navas completed a counterattack to add the third in the 90th minute.

“To win the first trophy I think is important for us all .?.?. because at an important club you must win trophies,” said Pellegrini, the Chilean who spent a decade in charge of Spanish clubs without a winners’ medal.

“In the second half, we changed it and scored two beautiful goals and we had the patience to win.”

City is in the Premier League title hunt and has reached the FA Cup quarterfinals but must overturn a 2-0 deficit against Barcelona to advance in the Champions League from the round-of-16 stage.

“I hope it will bring confidence for us to win the other trophies,” Nasri said.

After more than $1.5 billion of Abu Dhabi investment in less than six years, City has now won each of the domestic trophies in three years, following the 2011 FA Cup and 2012 Premier League title produced by Mancini.

But, in a showpiece game seen live in about 180 countries, City was unpicked after just 10 minutes by a team fighting relegation when slack defending allowed Sunderland to pounce.

Fernandinho was dispossessed next to the Sunderland penalty area, allowing Sebastian Larsson to launch a counterattack before passing to Adam Johnson on the right wing.

Johnson then sent the ball high down the flank to Borini, who easily slipped beyond captain Vincent Kompany before scoring low past Costel Pantilimon.

In response, there was little threat from a team which is six points off the top of the standings but with two games in hand.

Sergio Aguero, back after five games out with a hamstring injury, launched himself down the right flank midway through the first half.

But after crossing to Nasri, the France midfielder’s sight of goal was partially obscured by Lee Cattermole and it was a trouble-free save for Vito Mannone.

Making amends for his earlier slackness, a well-timed tackle by Kompany cut out Borini’s run on goal - denying Sunderland a chance to double its lead before halftime.

“Our first half, there was memories of Wigan,” Nasri said, referring to last year’s FA Cup final loss. “We said that we need to stay calm, to remain focused and play our football.”

City did just that, and two exceptional moments swung the game in City’s favor.

The curling shot from Toure looped over Mannone into the corner of the net, giving the defensive midfielder his 17th goal of the season.