CEO sees creativity as the life of insurance

CEO sees creativity as the life of insurance 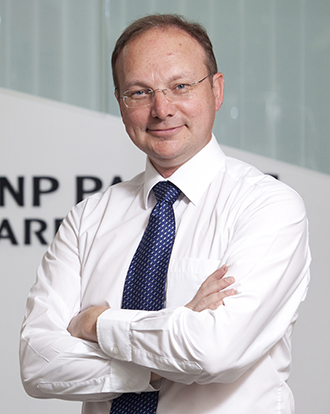 Jean-Christophe Darbes, CEO of BNP Paribas Cardif Life Insurance, is a big fan of American magician David Copperfield, who never benchmarks others but always thinks of something original.

The magician has an organized system that makes his staff pitch new ideas every day, which is similar to BNP Paribas Cardif Korea under Darbes.

“We have a system called Innov. Lab that lets our staff come up with new ideas once a month. At first, it is difficult to do, but it gets easier when you get used to the system, Darbes said in an interview with the Korea JoongAng Daily last week.

Under the system, employees of the French life insurer get out of their office once a month to do whatever activities inspire them with new ideas.

“To be creative, you should stay open and try each time you get information to convert that into an idea. Since we have a small marketing department, we can’t rely on one or two staff members for new ideas. If more people put their heads together it becomes much easier,” he said.

In one Innov. Lab activity, Darbes asked his staff, “What is the meaning of boheom [insurance in Korean]?” When his employees answered, “Insurance,” he said. “No. What is the direct translation of that word?”

To him, boheom means risk remover in a broader sense that affects a person’s future.

“If we have a wrong translation of our product, we misunderstand what consumers want from us,” Darbes said. “It was just asking, talking and challenging, which made it possible to create innovative products.”

Q. As the result of the Innov. Lab system, what kind of innovative products have you developed?

A. As a solution for the low interest rate environment, we launched the industry’s first variable life insurance product invested in ELS (equity linked securities) last year, which allows customers to invest in a safer asset than direct equity investments and offers a relatively higher return compared to the average deposit interest rate. By meeting customers’ growing needs for the “mid-risk and mid-return,” these products has received wide attention from partners, customers and even competitors.

The Korean financial market is, according to foreign financial experts, heavily regulated. Do you agree?

Korea has very strong potential to be a financial hub in Asia with its cutting-edge IT technology and other services. But, to be more attractive, it should migrate the financial rules to meet the international standard. However, regulation in Korea is always very logical and sensible.

What are the differences and similarities between insurance markets in Korea and France?

Korean and French have a similar culture and investment behavior. The French life insurance market ranks fourth in the world after the United States, Japan and United Kingdom.

In France, bancassurance (an insurance partnership between banks and insurance companies) is a big sales channel through which 60 percent to 70 percent of life insurance are sold. People have high awareness of the merit of bancassurance, so most of them apply for insurance through bancassurance.

The Korean bancassurance market is very open because a bank sells the products of 17 to 20 insurers.

What are BNP Paribas Cardif Life Insurance’s goals for this year?

In the Korean insurance market, our target is not to become the top insurer in terms of market share. Rather, our focus is on increasing the benefits to our customers, shareholders and staffs, while contributing to local communities. We aim to introduce innovative products based on our customer centric program.

The products without surrender penalty which have been highly recognized by the local authorities like the FSS and financial experts with four external awards. We will also strengthen our cooperation with partners. BNP Paribas Cardif is known for its unique and effective partnership model which really works through world-wide network. Following BNP Paribas Cardif’s long experience in the partnership channel, we will try to serve and support our partners in more effective ways. Customer care is indeed the center of BNP Paribas Cardif Life Insurance, which will take initiative to support the strategic direction.