Korean items a hit online in some unlikely places

Korean items a hit online in some unlikely places 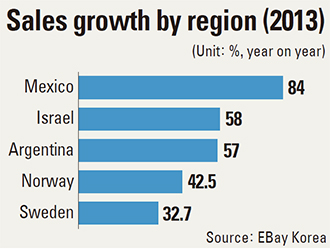 Consumers in Mexico, Israel and Argentina are emerging as the biggest buyers of Korean products sold online, according to a study by eBay Korea, the operator of the country’s two largest online shopping malls.

The operator of Gmarket and Auction analyzed sales of products manufactured by local small and midsize enterprises (SMEs) sold via its global online shopping mall, with results showing that demand has grown from consumers in some unlikely places.

According to eBay Korea, exports of Korean SME products via the eBay shopping mall jumped 84 percent in Mexico in 2013 compared to the previous year. Sales went up 57 percent in Argentina, followed by 42.5 percent in Norway and 32.7 percent in Sweden over the same period, emerging as burgeoning markets for online exports.

EBay Korea has been offering an export support program for SMEs called cross-border trade (CBT) since 2009, providing them not only with an online export platform but also with additional assistance, sales guidelines and consultations. The online platform provides manufacturers with about 100 sales destinations.

Currently, there are approximately 5,000 SMEs and small-business entrepreneurs or global sellers receiving eBay Korea’s support. The move is a part of efforts to help SMEs enter overseas markets, long considered difficult because of a lack of information and sales expertise, and constantly changing regulations.

However, although there was significant sales growth in countries like Mexico and Argentina, the largest spending group was still China, the study showed.

According to eBay Korea, the average sales price index for consumers in China was 337, with 100 as the median for all countries, meaning that Chinese consumers spend three times more than the worldwide average.