In address, Park speaks of unification

In address, Park speaks of unification 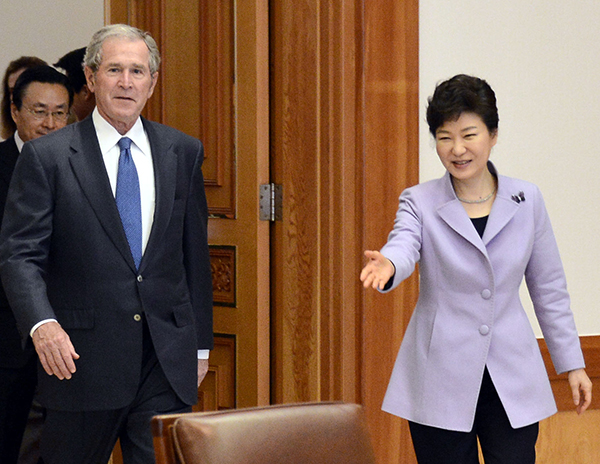 The prerequisite for the unification of the two Koreas is the denuclearization of the North, and the sooner Pyongyang gives up its nuclear ambitions, the sooner that day will come, President Park Geun-hye said in a speech yesterday.

“In the united Korea, there won’t be the horror of war and nuclear threats,” she said yesterday morning at an international conference in Seoul. “The path toward unification will be further shortened if North Korea drops its nuclear weapons sooner.

“Linking the new Korean Peninsula with the Eurasian continent, thus sublimating it into the new growth engine and the light of prosperity for the entire East Asia is the era of unification I dream of,” Park added, displaying for the audience a recent satellite image of the Korean Peninsula at night, which shows the reclusive state as a black abyss.

The president explained that her repeated remarks that unification will be the “jackpot” embrace not only the ideas of peace, freedom and human rights, but also the value of prosperity that could be enjoyed by the two Koreas and its people.

She went further, using Germany as an example. The divided European nation, she said, achieved unification thanks to thorough preparation and its leaders’ courageous resolutions.

“For the Korean Peninsula not to lose, should the historic opportunity for unification arrive, we should prepare step by step starting now,” Park said, adding that the unification preparatory committee she proposed late last month should be the initial step.

Later in the morning, the president greeted former U.S. President George W. Bush at the Blue House, who was in Seoul to participate in the conference, and discussed the Korea-U.S. alliance as well as North Korean issues. The two both have fathers who also served as presidents in their respective nations.

“The Korea-U.S. alliance grew into a global partnership as the two countries closely cooperated on issues related to North Korea’s nuclear ambitions and the conflicts in Afghanistan and Iraq [during Bush’s term],” Park said.

“The free trade agreement between the two countries and the U.S. Visa Waiver Program with Korea contributed to enhancing our economic partnership and human resources exchanges.”

The president also thanked Bush for his continuing active efforts toward world peace and prosperity. The former U.S. commander in chief, in turn, reciprocated that praise, commending Park’s “strong leadership.”

Bush added that the two nations currently have a very tight relationship and presented her with his 2010 memoir “Decision Point.”