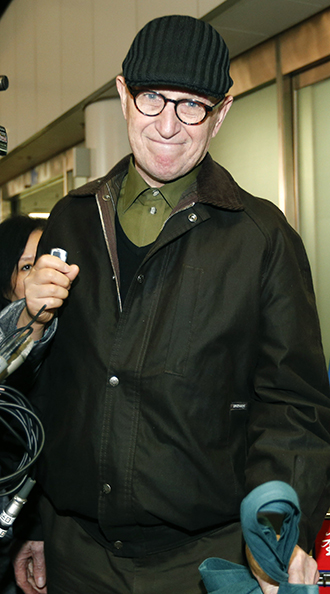 Australian missionary John Short walks out from the airport terminal as he arrives at Beijing International Airport in China. [AP/NEWSIS]

John Short is one of three foreigners known to have been detained by the regime recently and his arrest may serve as yet another indicator of North Korea’s intolerance toward religious freedom.

The North’s official Korean Central News Agency yesterday carried a picture of a handwritten confession by the 75-year-old Short, who was arrested last month after he allegedly committed a “criminal act” by distributing Bible tracts on Kim Jong-il’s birthday at a Buddhist temple in Pyongyang.

“I deeply apologize for what I have done by spreading my Bible tracts on February 16th, the birthday of his Excellency Kim Jong-il,” Short said in a three-page confession dated March 1, which was released by the KCNA. In the letter, his thumbprint was stamped in red ink.

“I realize that the mass media of the USA and the western countries who say that the DPRK is the closed country and has no religious freedoms is inaccurate and wrong,” he added in the confession.

The North said yesterday that it was expelling Short, taking into consideration his age and the “tolerance” of its laws. Short was picked up at the Beijing airport by Australian consular officials yesterday and did not speak to reporters, Reuters reported. Australia’s Foreign Ministry said in a statement that the officials will help ensure his return home. On Feb. 12, Short left his home in Hong Kong to join a tour to North Korea. He was taken from his Pyongyang hotel by police on Feb. 18.

The North said that Short committed a criminal act by secretly spreading Korean-language Bible tracts around a Buddhist temple in Pyongyang and attempting to proselytize after entering the country as a tourist. The KCNA also accused him of spreading religious leaflets on the Pyongyang metro in August 2012.

Short, who runs a printing house that publishes Bibles, carried Christian leaflets translated into Korean on this trip, according to his wife. His detention was made public after a traveling companion left the country on Feb. 18 and informed Short’s wife, Karen, of the circumstances.

The order of the arrest, confession and release was similar to that for American citizen Merrill E. Newman, an elderly Korean War veteran who was detained in North Korea last year. His confession was written in stilted English, and after his release in December he admitted that it had been coerced.

In November 2012, Korean-American tour operator Kenneth Bae was sentenced to 15 years of hard labor on charges that he tried to overthrow the government. His release has not yet been negotiated.

In a rare media conference last week, a South Korean missionary held in North Korea confessed to spying in the North at the behest of the National Intelligence Service (NIS), South Korea’s top spy agency, and attempting to build an underground church in the state. Last week, North Korea revealed that it had arrested a South Korean Baptist missionary, Kim Jung-wook, and detained him for the past four months on suspicions that he tried to establish underground Christian churches in North Korea.

Kim said in a news conference in Pyongyang that he was arrested in early October while trying to make his way to Pyongyang with Bibles, Christian instructional materials and films. He said he received assistance from South Korea’s intelligence agency, which the NIS has denied.

“Although the practice of Christianity is not explicitly criminalized, effectively the authorities consider it a political crime,” and Christian missionaries are portrayed as the products of U.S. capitalism, a February report published by the Commission of Inquiry on human rights in North Korea said after its yearlong investigation.

According to the Database Center for North Korean Human Rights, an estimated 200,000 to 400,000 Christians profess their religion secretly in North Korean despite high risks.