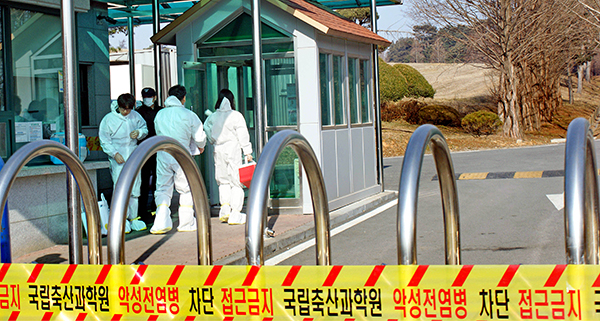 Government employees are dispatched to the National Institute of Animal Science in Cheonan, South Chungcheong, with blood test equipment yesterday. The H5N8 strain of avian influenza was detected from carcasses of ducks raised there. [NEWSIS]

The avian influenza (AI) virus was found in the carcasses of ducks in a National Institute of Animal Science facility in Cheonan, South Chungcheong, on Sunday, signaling that the virus is still spreading throughout the country.

The Ministry of Agriculture, Food and Rural Affairs said yesterday that it detected the H5N8 strain of the virus in the ducks. The results of an examination to determine whether the virus is highly pathologic is expected to be released today.

The ministry decided to cull all the 16,000 chickens and ducks bred at the institute’s farm to prevent the disease from spreading.

The state-run institute protects and preserves gene resources of chickens and ducks, and has dispersed them into several facilities throughout Korea to minimize damage from threats such as the bird flu.

It is the first outbreak of bird influenza in the NIAS, but the facility has been in the danger zone, within a three-kilometer (1.8-mile) radius of a duck farm infected by the highly pathogenic AI in Pyeongtaek, Gyeonggi, on Feb. 24.

“Even though the chickens and ducks are culled, we will restore [the species] as quickly as possible using the gene resources preserved at other facilities,” said Kim Seong-il, an official of the Rural Development Administration. “We will make sure the researchers continue their studies.”

However, because the institute’s branch in Cheonan is a major research facility, their work is likely to be delayed. The institute estimated the full recovery will take a maximum of two years.

The institute is also trying to discover the source of the virus. When the nation was hit by AI, the institute restricted contact with outsiders for nearly two months, and even prohibited its 107 workers and researchers from going home.

Despite such efforts, the outbreak may prevent them from leaving the venue for another 21 days, according to related regulations.

“The wild birds nearby may have transmitted the AI virus into the institute,” said Kim Jae-hong, a professor of the College of Veterinary Medicine of Seoul National University. “[The institute] should find out the source and also check the quarantine conditions of nearby areas.”

Given that one of the safest facilities has been compromised, authorities worry the disease might spread even further. Yet despite all-out government efforts, with two stand-stills and strong quarantine measures after the first outbreak of AI in North Jeolla in January, the damage done by the disease is increasing, with the number of culled birds at 6.6 million.