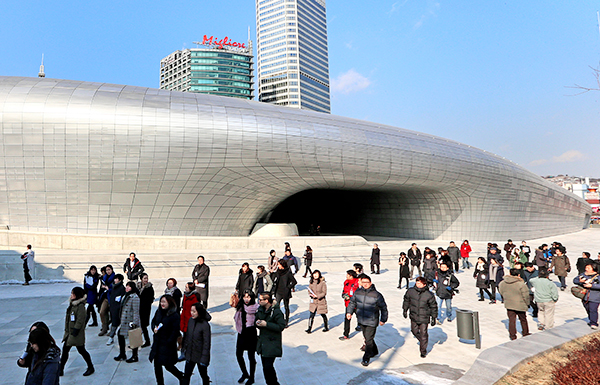 The Dongdaemun Design Plaza (DDP), an enormous cultural and industrial complex set to open March 21 in Seoul, will have five sections devoted to showcasing venues for up-and-coming designers, as well as high profile events in the city, the Seoul Design Foundation announced yesterday.

Some of the DDP’s facilities will also operate around the clock to correspond with working hours in Dongdaemun, northeastern Seoul, where throngs of wholesalers and nocturnal patrons flock to the fashion district at night, it said.

The foundation, which oversees the operation of the DDP, yesterday unveiled detailed features as well as its management plan for the 86,574 square-meter (931,874 square feet) establishment developed by renowned architect Zaha Hadid.

The Art Hall, situated on the second underground level of the building, which has three stories below and four stories above ground, will host conferences, fashion shows and concerts, according to those plans.

The opening day of the DDP coincides with the start of Seoul Fashion Week, which is scheduled to run through March 26 at the Art Hall.

Occupying parts of the second underground area through the fourth floor, the museum will also provide a space for art exhibits and is set to offer a digitalized three-dimensional science hall for teens.

The Design Lab, located from the first through fourth floors, will serve as a showcase for design companies and designers at home and abroad to promote their products.

According to the foundation, the section referred to as the Design Market will link the subway with the DDP, housing 24-hour convenience stores and restaurants.

Likewise, the Dongdaemun History and Culture Park, which surrounds the futuristic complex, will be dedicated to memorializing the remnants of the ancient walls that protected the city during the Joseon Dynasty (1392-1910) and will serve as a venue for various exhibits.

The DDP has eight different inaugural exhibitions to come, the foundation said.

Headlining the opening will be the exhibition by the Kansong Art Museum, which promotes historically significant Korean relics, with 59 artifacts on display.

It was originally founded in 1938 by collector Jeon Hyeong-pil (1906-62) to preserve historic items during Japanese colonization and has traditionally held free exhibitions biannually, staying closed for the remainder of the year.

The outside exhibition at the DDP will offer a rare glimpse into Kangsong’s collection.

Started in 2006, the urban cultural center remains one of the most ambitious construction and landscaping projects in Korea, with 484 billion won ($452 million) spent.