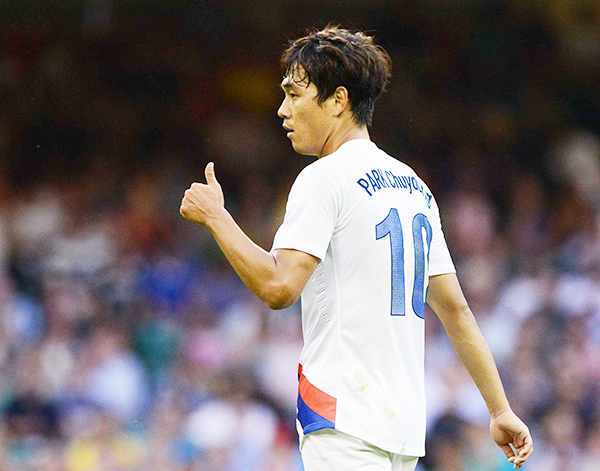 “Forgotten striker” Park Chu-young of Watford FC will get a last chance to show that he is worthy of joining Korean national football team coach Hong Myung-bo’s final roster for the Brazil World Cup that kicks off in June.

The Taegeuk Warriors will have a friendly match versus Greece - whom they overpowered, 2-0, in the 2010 South Africa World Cup - at 2 a.m. on Thursday Korea time at Karaiskakis Stadium in Athens.

The national team will then have one last friendly, against Tunisia, on May 28, but because Greece is a tougher opponent that will test Korea’s competitiveness, analysts predict that Hong will finalize his 23-man roster soon after Thursday’s match.

Hong’s biggest concern is Park, 28, who has had difficulty getting a chance to play not only for Watford, but also for the national team. Hong has said consistently that he would not use a player who hasn’t played much on his own team, but he called up Park last month after the team had a hard time scoring because of a lack of decent strikers.

Although Park featured on two World Cup teams, in 2006 and 2010, he hasn’t represented the national team in 13 months.

Though Park hasn’t played much for Watford, he is expected to start the friendly because Hong is trying to evaluate his skills in a full game. Under Hong’s favorite 4-2-3-1 formation, Park is expected to be on the top of the offense line, while “Sonsation” Son Heung-min of Bayer Leverkusen will be the left wing, “Blue Dragon” Lee Chung-yong of the Bolton Wanderers will be the right wing. Koo Ja-cheol of FC Mainz will play on the center of the attacking midfield line.

Ki Sung-yueng of Sunderland and Han Kook-young are expected to be the defensive midfielders, while Kim Jin-soo, Kim Young-kwon, Hong Jung-ho and Lee Yong will be the defenders. Kim Seung-kyu will be the goalkeeper. Striker Kim Shin-wook, who is 196 centimeters tall (6 foot 5), is expected to be a substitute.

“I consider this match my last chance to go to the Brazil World Cup,” Park said. “I want to show everything I have. Since I haven’t played many games, I might not be as sharp as many people expected, but I don’t want to give myself such an excuse. One good thing is that there are many friendly faces on the team, including Koo and Lee [Chung-yong]. I will try to cooperate with them for a good outcome.”

The question is whether the addition of Park would solve the team’s weak scoring ability, which has been Hong’s worst headache since he became the coach of the team in June. The truth is that many people think Hong will bring Park to Brazil anyway because the two have a good relationship.

Before the 2012 London Olympics, Hong, who led the Olympic team at that time, called up Park, who was facing severe public criticism over acquiring a green card from Monaco. Park explained that the green card was necessary for him to continue his career in Europe, not an attempt to dodge his military service duty, and promised that he will enlist in the military when his career in Europe ends. However, the public didn’t believe him. So, Hong held a press conference with Park and announced that the striker would play in London and said that he would serve Park’s military duty if Park failed to keep his promise. Korea won the bronze medal by overpowering the nation’s biggest rival, Japan, 2-0, and Park scored the first goal of the match.

But if Park can’t prove that he is still a competitive attacker, Hong will have a tough time explaining his decision. Hong has been saying that his roster is about 90 percent complete, and analysts say Park may be the last piece of the puzzle.

“It is obvious that this is the very last rehearsal before the World Cup,” Hong said. “I don’t care about the outcome we will have after the match, but the team certainly needs to show a better performance.”