Brazil rocks to the beat of Carnival

Brazil rocks to the beat of Carnival 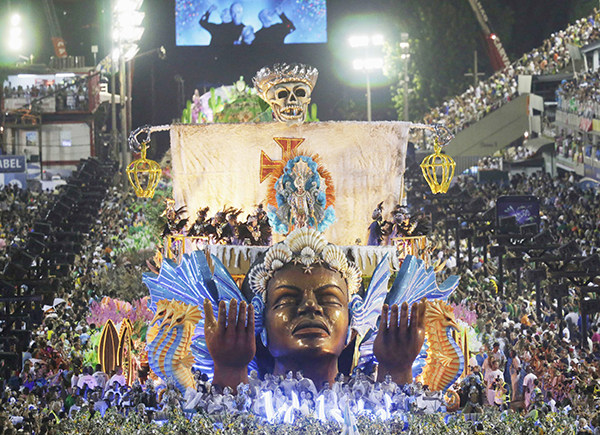 The annual spectacle pits the city’s 12 best samba schools against one another in ornate parades that include over 2,500 participants each and cost more than $3 million to produce. The efforts are judged in 10 categories, with a winner announced later in the week, laying claim to nothing more than a year’s worth of bragging rights.

The enormous effort is largely made by Rio’s poorest citizens - the samba schools are mostly located in impoverished neighborhoods, and armies of volunteers from nearby slums spend nine months or more sewing, sweating and practicing the samba songs and dance moves, all for an 80-minute presentation before well-imbibed spectators.

“Samba is the root that binds Brazilian culture,” said Nanny Kammura, a 35-year-old kindergarten teacher and mother who transforms into a “passista” samba dance specialist for the Mocidade school when the big party rolls around each year.

“We’re here honoring that culture, our roots. It’s ours, it’s Brazilian,” she said just before her school began its parade, during which she wore an enormous green feather headdress and minuscule sequined silver top and bikini bottom. “Yes, it’s a party. But it’s also us honoring our history and ensuring that samba will never die.”

Zelma Freitas, a 48-year-old office secretary, sat in the front row of the cheap seats section at the Sambadrome, the 700-meter-long (nearly half a mile) avenue lined with grandstands. She didn’t hesitate to say how she would explain to outsiders why Brazilians go through such effort and cost for the spectacle.

“It’s pure joy, mostly for those of us from humble backgrounds, who take pride in and root for our favorite (samba) schools,” she said as the municipal band struck up Rio’s beloved anthem song, “Cidade Maravilhosa,” or Marvelous City, to open the parading. “Perhaps it’s inexplicable to outsiders, but this means so much to the poor, who for the rest of the year have to face our daily reality. Today, I leave that behind and embrace this fantasy.”

Carnival wraps up Tuesday as Rio collapses in exhaustion ahead of Ash Wednesday and the beginning of Lent.

Aside from the parades, since Friday nearly 500 street parties have taken over the city, with tourism officials forecasting an influx of more than 900,000 tourists. It’s the last big event that Brazil hosts before the World Cup, international football’s showcase tournament that opens in 12 cities across the nation in June.