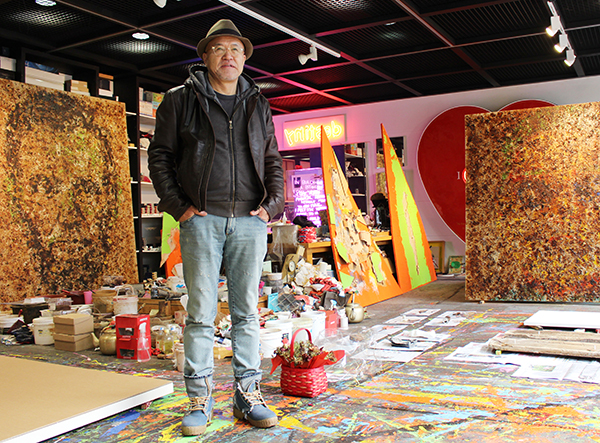 Arario Group Chairman Ci Kim, an art collector and artist himself, poses in his studio in Cheonan, South Chungcheong. By Moon So-young

CHEONAN, South Chungcheong - It is a busy year for Arario, one of Korea’s leading commercial galleries. Tomorrow, it will open a new Seoul branch, relocating from Cheongdam-dong in the city’s south to the art zone east of Gyeongbok Palace in the city’s center. It also plans to open a new Chinese branch in Shanghai in May.

In addition, the gallery is working on creating an art museum out of the historical complex by Changdeok Palace that used to be occupied by Space architectural firm, with the goal of opening it in September. It will be Arario’s first art museum purely for exhibition and research, not for dealing art. The gallery will also open several museums around the southern island of Jeju in October, made from old buildings.

In the center of these moves stands Arario Group Chairman Ci Kim, a man with at least three jobs: he’s a businessman who owns and operates bus terminals and a department store in Cheonan, South Chungcheong; he is an art collector who six times has seen his name make the list of the world’s top 200 art collectors by the New York-based art magazine ARTnews; and he is an artist himself, making a variety of works, such as iron powder paintings and installations of found objects.

The Korea JoongAng Daily met Kim in Arario Gallery’s headquarters in Cheonan last week. Kim was in his studio on the top floor of the gallery building. The place looked full of cheerful chaos. Big canvases were set against the walls, with neon works glowing over them. Here and there stood mannequins Kim had transformed into self-portraits. And on the paint-stained floor was a variety of junk that he had collected from the beaches of Jeju Island to turn into artworks.

Kim pointed to two pieces of wood among the odds and ends. Each had a word written on it, “destiny” and “museum.”

“Destiny and museum are the two words that have struck me the most throughout my entire life,” said the 63-year-old connoisseur, clad in a casual pair of denims.

The Korea JoongAng Daily began the discussion by asking Kim about his sudden purchase of the Space complex in November and his plan to turn it into a museum. With the Space architectural firm in court receivership, the fate of the complex - which includes an ivy-covered brick building often called “a masterpiece of Korean modern architecture” - had been uncertain and the subject of much concern.

Q. You finally have a space to present the artworks that you have been collecting over the last 35 years. It seems like a belated opening, doesn’t it?

A. In the early 1980s, I had the chance to visit the Museum of Contemporary Art in Los Angeles. I still cannot forget the shock that it gave me at that time. It was as if I travelled to another world. That made me dream of creating a space to inspire Korean viewers as well. But since it wasn’t a simple task, I had to do everything step by step. By the mid-2000s, it occurred to me that it would be more meaningful if I approached it in a creative way, such as transforming long-derelict spaces into museums. That’s why I decided to buy the Space complex, after I heard that nobody bid for it in a public auction.

Do you mean your decision to purchase the Space complex was just an impulse?

That’s true. I was on Jeju Island on Nov. 24 when I saw the news on TV that the complex didn’t sell in an open auction. I was puzzled to learn that such a historical building would be also a “derelict space.” So I took action. I was supposed to go to Seoul the next day. In the morning of Nov. 25, I checked by phone if I could still purchase the building, and within an hour and a half I was signing the contract in Seoul. Isn’t that amazing? How can you not call that destiny? Some people say it must have been my elaborate scheme from the start. [Laughs]. But that’s not true. I guess it was all meant to be.

I heard you agreed with Space that you would never remodel the ivy-covered brick building, which was designed by architect Kim Swoo-geun, the Space founder. So instead you plan on using another building there, the glass-covered one, for art exhibitions.

Some people worry that it would be almost impossible to hold exhibitions there without remodeling due to its eccentric spaces. But guess what? Utilizing such spaces can sometimes be much more fun. It’s like solving a difficult riddle. The interior of the building unravels into unique and intricate spaces. I think a competent curator should be able to get the most out of this limited space.

The opening exhibit will be curated by me. It will be an opportunity to take a glimpse at my philosophy and perspective toward art.

Let’s talk about your museum project on Jeju Island. Were you inspired by the Japanese island Naoshima, which is known for contemporary art museums and installations?

I’m afraid not. The whole [island] of Naoshima was developed as a certain project. The art museums and installations were set up there in the way of ikebana, or the Japanese art of flower arrangement. On the other hand, I will make the Arario museums rise from long-derelict spaces here and there around Jeju, the way wildflowers on the island bloom under the stone walls amid fierce winds.

Although I cannot reveal the entire plan, I will unveil some parts of it to you. We are transforming Tapdong Cinema in downtown Jeju into an art museum. Built in the early 2000s, the movie theater introduced multiplex cinemas to the island, but it closed in 2005 because of declining revenues. For nearly a decade since then, it has been derelict.

We are also transforming Tapdong Bike and other shops in other parts of the island into museums. I hope that we will open three of them this October and a total of eight to 10 museums on Jeju in six to seven years.

Whereas art installations in Naoshima are mostly permanent, the works exhibited in the Arario museums on Jeju will be changed every eight months. Only 15 percent of the works will be on permanent display. In Tapdong Cinema, I’m thinking of installing Japanese artist Kohei Nawa’s “Deer Family” as a permanent exhibit. As part of the museum’s inaugural exhibition, Indian artist Subodh Gupta’s giant work in the shape of a ship will hang from the ceiling.

Arario Gallery in Seoul is relocating to be beside the National Museum of Modern and Contemporary Art (MMCA) Seoul. Do you expect any kind of competition?

Competition creates innovation, so I think that will be helpful. It is quite important for a commercial gallery to have a good location. As many art lovers come to the MMCA Seoul, we expect them to spill over to our gallery. Our new space is twice as large as our previous one in Cheongdam-dong.

Tell me about your plans in China. I heard that a new Arario Gallery is opening in Shanghai. What happens to the one in Beijing?

Shanghai is emerging as the hub of the Chinese art market. In Shanghai, Arario will focus on prominent Asian artists. Our base in Beijing will only be used as an office. Beijing has stricter regulations and higher rent prices.

Sculptures by famous artists can be found all over the so-called Arario Small City, an area that covers the Cheonan Express Bus Terminal, Shinsegae Department Store’s Chungcheong branch and Arario Gallery. From left: The 13-meter-high (43-foot) sculpture “Manifold” (2013) by Japanese artist Kohei Nawa; the 7-meter-high “Charity” (2002) by British artist Damien Hirst; “Line of Control” by Indian artist Subodh Gupta; and 3-meter-high “Not Afraid of the Big Bad Wolf” (2001) by Korean artist Inbai Kim

In Korea, art dealing is not known as a lucrative business. Have you used your other businesses to make up for the losses in the gallery business?

Well, throughout my 35-year career, I’ve been in the black in terms of overall business only for the last six to seven years. So it was not because I had tons of money that I started collecting art and doing the gallery business.

When I first kicked off my business in the art world, my friends used to say, “Easy, buddy. You’ll only suffer.” That depressed me, but I never gave up.

I am happy that I finally was successful after I got older. If I had succeeded early in my 30s, I would have strayed from the path and done something nasty. In addition, my difficult experiences as a businessman and art collector helped me become an artist.

Do you have any problems being a collector and an artist at the same time?

Creating artworks is not just fun for me. I’m not just tinkering with art to occupy my time. I devote at least four hours a day to coming up with creative works in my studio. I believe my entrance to the art scene was destined from the start.

In the past, I felt uneasy about pursuing the two paths, as a businessman and as an artist. But one day I came to realize that my business, collecting art, and creating artworks are intertwined, which consequently is like an art performance itself. Then all the anxiety that burdened me vanished.

However, I’m exposed to constant danger, since failure in business can affect my art, and vice versa. Although I know it’s very risky, I cannot help but do it.