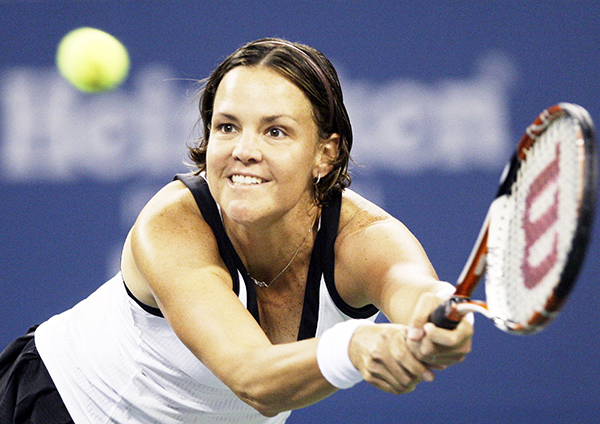 In this 2008 file photo, Lindsay Davenport of the United States returns to Alisa Kleybanova of Russia at the U.S. Open tennis tournament.

Lindsay Davenport was in the middle of another major life milestone when she found out she had been elected to the International Tennis Hall of Fame.

The three-time Grand Slam champion got the call when she was in a hospital about to give birth to her fourth child in early January. With daughter Haven nearly 2 months old now, Davenport can start to reflect on the honor.

“Growing up playing tennis, getting to the Hall of Fame was never even in my dreams,” she said on a conference call on Monday after the class of 2014 was announced. “It seemed a little bit too big for me.”

The 37-year-old Davenport is thrilled that at the enshrinement ceremony in Newport, Rhode Island, on July 12, her 6-year-old son, Jagger, will get to learn about the sport’s history. He plays tennis, too.

Davenport won the 1998 U.S. Open, 1999 Wimbledon, 2000 Australian Open and 1996 Olympic gold medal to go with three major doubles titles. The American held the world No. 1 ranking for 98 weeks in her career.

That first major championship, at her home Grand Slam event, will always be special.

“For any player who has ever played with insecurity, not sure where they’re supposed to be, how good they are, that really was a huge moment, not just in my career but for me personally,” Davenport said.

Bollettieri, now 82, has coached 10 players to the No. 1 ranking, including Andre Agassi, Jim Courier, Monica Seles and Boris Becker. In 1978, he founded the Nick Bollettieri Tennis Academy, the first full-time tennis boarding school.

At a news conference in New York, Bollettieri acknowledged this was one of the few times in his life he felt at a loss for words.

“To be standing aside some of the players I’ve helped achieve what they are,” he said, “is a dream that even Nick Bollettieri can’t comprehend.”

Vandierendonck was a top Dutch player before she was injured in a car accident in 1983 and went on to become a pioneer in wheelchair tennis.

Barrett was the “Voice of Wimbledon” on the BBC from 1971-2006. His wife, former top-ranked player Angela Mortimer Barrett, was inducted into the Hall in 1993. Agassi and Steffi Graf are the only other married couple in the Hall.