Texas’ Lewis struggles in his return to mound

Texas’ Lewis struggles in his return to mound 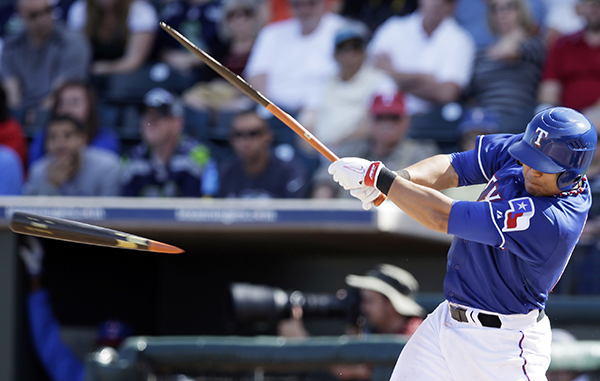 Choo Shin-soo of the Texas Rangers breaks his bat on a pitch from the Cleveland Indians’ Vinnie Pestano on Monday.

Texas right-hander Colby Lewis failed to get out of the first inning in his first start since having hip surgery in August, and the Rangers lost to the Cleveland Indians, 6-5, on Monday.

“My stride is so much longer now with so much more range in my right hip, that I’m just going to have more reps to find the release point,” Lewis said. “I had a certain way of going about my mechanics the last four or five years. Now I have to make an adjustment.

“It’s just the inconsistencies. I’d hit it good one spot and the next time it would be off six to eight inches or a foot. People say it’s the first one and get it out of the way, but I expected more out of myself,” Lewis added. “It is what it is, move on and fix some things and hopefully the next one’s better.”

Mitch Moreland drove in two runs for the Rangers with a sacrifice fly and groundout.

Russell Wilson, the Seattle Seahawks Super Bowl champion quarterback, brought out the Rangers’ lineup card to an a rousing ovation with cameras clicking.

The Rangers selected Wilson, who was wearing No. 3, in the Triple-A Rule 5 draft in December.

Wilson hit .229 in 93 games in the low minors in 2010-11 in the Rockies’ farm system but gave up baseball for football. Wilson was scheduled to be in the Rangers camp for just one day.

Meanwhile, the Baltimore Orioles have been busy signing free agents since training camp opened last month. Johan Santana could be next.

Santana was at Baltimore’s training complex on Monday, and he posed for a photo with young pitcher Eduardo Rodriguez, who sent it out on Instagram.

Chris Davis, who hit a long home run to center field in the Orioles’ 9-2 loss to the Minnesota Twins, likes the idea of signing Santana.

“In the past he was one of the best,” Davis said. “Hopefully he can regain his form and be a help for us. There are some things you can’t coach and experience is one of those things, and he definitely brings that to the table.”

The left-hander threw for the Orioles and several other teams last week in Fort Myers, Florida.