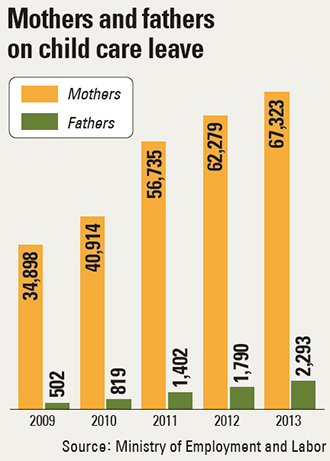 Rather than heading straight into the office, Yeo In-han, an ICT consultant at SK C&C, starts his day by preparing to take his 4-year-old son to day care. Even on work days, he walks his son to the center every morning and spends the weekends visiting museums and amusement parks with him.

New mothers usually take parental leave after childbirth, though Yeo is one of the few male employees at his company who signed up for the option of taking childcare leave.

His decision, admittedly, left many of his co-workers baffled, especially in a society in which men who take extensive leave - especially for child care - are often demoted or let go from their jobs.

But his answer was always simple, and his boss and his colleagues slowly became more open minded and appreciative.

A few Korean companies like SK C&C are slowly adapting to these changes. Granted, the number of men who choose to take parental leave is still small, but it’s steadily rising. In fact, many companies are finding that allowing fathers to take child care leave actually has benefits, increasing worker loyalty and productivity.

After coming back to the workplace, Yeo explained that the support he received just made him more devoted to his job.

“I encourage my colleagues to be more active in taking leave. My family and I were happier, and my appreciation toward my boss and my co-workers is deeper,” he said. “I believe child care leave is ultimately helpful to both employer and employee.”

SK C&C was officially certified by the Ministry of Gender Equality and Family last year as a family-friendly company. In 2012, it sent all 84 of its eligible fathers and four of its mothers on a one-year parental leave.

Small and midsize companies were also seen to have performed as well as conglomerates.

According to the ministry, 111 small and midsize companies have been certified as family friendly, as have 87 conglomerates.

GS Wood, a small-size wood manufacturer based in Changwon, South Gyeongsang, sent four out of five of its eligible fathers on child care leave in 2012, though they were given two months and had to find alternative resources for care in the meantime.

Sending male employees on childcare leave was part of the company’s “3-3-3 campaign,” which aims to promote the belief that all three entities - the employee, the family and the employer - should be equally happy and respected in order to keep workplace productivity at its highest.

“You can’t be productive at work when your child is sick or you’ve had a fight with your spouse over child care responsibilities. In a bid to bring out the best in each worker, we thought the fathers had to take a more active part in family life,” the company’s human resources manager said.

He explained that was possible thanks to the organizational atmosphere, which was accepting and understanding.

“The rest of the workers were able to fill about 70 percent to 80 percent of the business gap. They were totally willing to make the extra effort. Who knows? Anyone could get sick and go on leave. They were open in giving and receiving help from one another.”

However, an industry source contended that Yeo’s case is a rarity in reality, with a large portion of family-friendly policies revolving around mothers.

Despite labor law mandating child care leave for both parents, fathers, in most cases, refrain from that option because of a conservative corporate culture backed up by the social stereotype that women are responsible for raising children.

But the problem is that even with the government’s continuous push on companies to make workplaces more family friendly, many are reluctant, considering it costly and a detriment to the workforce.

Ever since 2009, when the Ministry of Gender Equality and Family started granting family-friendly companies with employee benefits, certification has continued to rise. Fifteen companies were certified in the first year, 23 companies in 2010; 95 in 2011; 101 in 2012; and 288 in 2013.

But an official at the ministry acknowledged that it still uncommon to find companies with men on family leave.

Samsung Electronics and Posco, which are both certified, provide part-time working-hour systems for mothers and are equipped with in-house child care centers. However, spokespeople from both companies did not provide a concrete record on child care leave for men.

“We certainly have a number of dads going on child care leave, but frankly, as a company, the number is not so big that we can promote ourselves as father friendly. But the number of such cases is rising slowly,” said an employee at a retail conglomerate with a family-friendly certification.

According to a 2013 report by the Korea Institute of Health and Social Affairs, only 12.2 percent believed they would be able manage both family life and work in their current place of employment, as opposed to 58.7 percent who said it was not possible. The other 29.1 percent responded that the environment was average.

Among respondents who answered negatively, men cited workplace culture and atmosphere as the main reasons preventing them from pursuing a work-life balance. Women, on the other hand, cited the possibility of career discontinuity and difficulty regaining employment as the most likely motives.

In a bid to attract more fathers to go on child care leave, the government recently rolled out an amendment to the current labor law - doubling the period of leave to a maximum of two years, raising the monthly child care salary to 60 percent of base salary and providing 100 percent of a father’s salary, with a 1.5 million won ceiling in the first month of the leave.

The government also extended the child’s age to 8, allowing more parents to be eligible.

However, many fathers and experts advise that reforming strict corporate culture is more important than simply expanding the amount of money provided.

Mr. Kwon, a civil servant, was one of a few brave fathers. He took a year off work to take care of his daughter, Na-eun. Now back at the office, Kwon contended that efficiency-oriented corporate culture is the problem, because it allows employees to spare less consideration for their colleagues.

“Rather than the child care salary, it is the atmosphere. How would an employee use a leave, when the corporate culture doesn’t even allow him to leave early from work to take his child to the hospital?” Kwon said. “These government policies are nothing new. Such reforms don’t help … The entire workplace has to be more accepting of family life. Otherwise, even if the government promises to provide us 100 percent of our full salary during leave, dads would be still unable to go on leave.”

However, Kwon is optimistic that society is, in fact, rapidly changing. When he went on leave in 2012, he said others were not all that interested in what fathers could do when it came to raising children.

Though, he insists he has seen changes in social perceptions in just the past two years. In a bid to help accelerate the change, Kwon has written about his experiences as a new father on his blog.

Still, many experts contend that the government should require employers to embrace new policies, rather than merely extending financial incentives.

“It is a problem concerning both employers and the government, because while many employers nowadays are following these policies, the main issue is the fact that such policy is not mandatory, which just leaves employees unable to practice their given rights,” said Go Seung-yeon, with the Hyundai Research Institute.