Foreign automakers get plenty of mileage from luxury models

Foreign automakers get plenty of mileage from luxury models

The Rolls-Royce Ghost Provided by the company

It is no longer a secret that imported cars have been gaining ground in Korea as their market share nears 15 percent. Industry insiders credit foreign manufacturers’ expansion of fuel efficient and affordable small cars that appeal to young people.

On the other side of the coin, the luxury car market has also been growing faster.

“There are still customers who want to differentiate themselves from others,” said a salesman at a luxury-car dealer. “Some people who buy these high-end luxury vehicles even say that BMW and Mercedes-Benz are too common these days.”

Experts say Korean consumers’ tendency to value “showing off” could be one of the reasons for the rising sales of luxury cars, a phenomenon that is particularly noticeable when compared to sales in Japan, where the imported car market is more than double that of Korea.

According to data from Kaida and the Japan Automobile Importers Association, the BMW 7 Series, which starts at 124 million won here, sold 1,920 units in Korea last year, more than five times the number in Japan.

The Mercedes-Benz S Class, however, was the only flagship model that sold more in Japan than Korea.

The rise of foreign luxury cars in Korea is also highlighted by the success of “super luxury” brands, many of which set annual sales records last year after releasing less expensive models.

A record 30 Rolls-Royces were sold in Korea last year, three more than in 2012. Twenty seven were the Ghost, which goes for 400 million won upward. In order to lure more customers, Rolls-Royce, now owned by BMW Group, released the Wraith, a two-door coupe that starts at 390 million won, last October.

Bentley, now owned by Germany’s Volkswagen AG, sold 164 units in Korea last year, up 21.5 percent from 2012 and the most since the British luxury brand landed in Korea in 2006.

While sales of its Continental GT V8 nearly doubled last year to 61 units compared to 2012, the Flying Spur W12, released in August with a price tag starting at 287 million won, sold 54 units. Bentley Motors Korea said preorders for these models have risen to the point where customers sometimes wait four months for delivery. 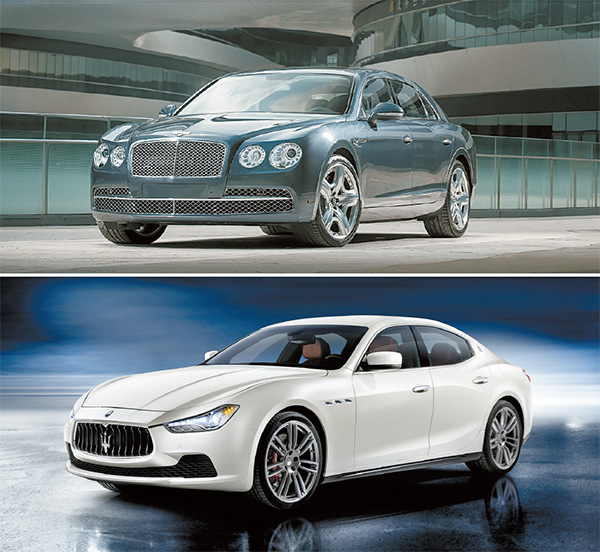 Some of the world’s most famous sports-car makers are also enjoying success. Porsche said it sold 2,041 units in 2013, up 34.6 percent from a year earlier. The Cayenne Diesel, a sport utility vehicle that costs more than 80 million won, was Porsche’s best-seller with 709 units, while the four-door Panamera 4 at 120 million won and up sold 187 units. Business has been so good that the luxury brand recently established a business unit in Korea to beef up sales and marketing. Korea is the 17th country in the world to have a Porsche branch.

Italy’s Maserati has also been smiling. According to Forza Motors Korea (FMK), the official importer of Maserati models here, 113 units were sold last year, more than double the number in 2012.

Its rising sales were led by new models such as the Ghibli, which starts from 109 million won, the Maserati’s most affordable car. FMK said that, even before its official release in October, the sporty sedan was sold out in Korea due to pre-order.

In 2014 - the brand’s centennial year - Maserati will release its first diesel model and its first ever SUV, the Levante.

For super sports cars like Ferrari and Lamborghini, precise sales figures in Korea are unknown because the companies don’t release the data. But industry insiders suspect 20 to 30 of the cars were sold in Korea last year. Data from the Ministry of Land, Infrastructure and Transport showed that as of end of 2013, there were 482 Ferraris and 175 Lamborghinis in the country.

Although their prices are jaw dropping, Ferrari and Lamborghini importers say they are looking to expand their number of showrooms and introduce new models.

Lamborghini Seoul, the official importer for Korea, said it expects to record sales in 2014 when the Huracan hits the market later this year. The Huracan LP 610-4, heir to the Lamborghini Gallardo, will be introduced at the Geneva Motor Show.

The price of Huracan LP 610-4, which produces 610 horsepower and goes from zero to 100 kilometers per hour in 3.2 seconds, has not been determined nor has the release date in Korea. Estimates are it will be in the neighborhood of 400 million won.