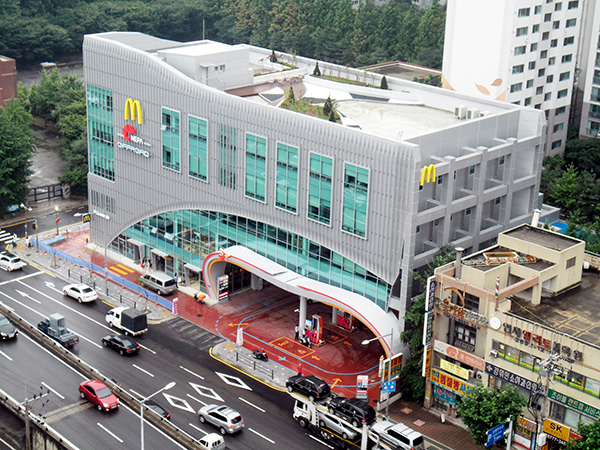 In September 2012, Dongbang Oil CEO Park Hyun-byung, who runs 13 gas stations in Busan, had a dilemma with his company’s Hyungje Gas Station downtown. Although the station had been a cash cow, sales were declining due to fierce competition in the region.

Because of its prime location, some people suggested that Park close the gas station and build a structure on the site with space to lease out. The 68-year-old Park liked the idea but didn’t want to quit the gas business. So he decided to build a four-story building, with a gas station on the first floor and the other three floors available for rent.

It turns out Park’s decision has been a big hit. Not only does Dongbang Oil collect more than 25 million won ($23,300) in monthly rent, the number of customers at the gas station has doubled.

Gas stations in Korea are changing to become part of mixed-use development, where rents are a substantial part of the owner’s revenues.

SK Energy, the nation’s largest oil refiner, operates only 24 “building-type” gas stations nationwide, but the number is expected to increase. These multiple-story buildings anchored by gas stations generate an average of 10 million won more a month than stand-alone stations, according to the company.

Industry insiders say that this could be a breakthrough for the ailing retail gasoline business. According to data from the Korea Oil Station Association (Kosa), the number of gas stations reached its peak in 2010 at 13,000. Last year, 310 gas stations closed compared to 219 in 2012 and 188 last year in 2011.

According to the insiders, Korea’s first building-type gas station was opened in 2007 by S-Oil in Jangchung-dong, central Seoul. Two years later, Hanyu Group built its headquarters in Bongcheong-dong, southern Seoul, with a gas station on the first floor.

As other refiners try to locate their gas-station buildings near bakeries, convenience stores and coffee shops, SK Energy offers consulting services on everything from design and construction to attracting desirable tenants.

SK Energy’s five-story Yangpyeong Gas Station with one underground floor is an example.

The gas station, which opened in June, has a McDonald’s on the first floor, with clothing shops and a pizza restaurant on the second floor and offices on the third, fourth and fifth floors. The monthly rent from the building is 100 million won, the company said.

“Before we built this building, we sold 340,000 liters (89,818 gallons) of oil, but now we are selling double that amount,” said Yoo Pyung-soo, head of the Yangpyeong Gas Station. “Above the gas station, there are places to eat, shop and work, so people stay here longer here and oil sales also increased.”

SK Energy said that since these “building-type” gas stations are so successful, it is considering making all of its 4,000 gas stations multipurpose spaces.

“We will offer a financial support regarding construction and consulting service for leasing and renting to help troubled gas stations,” an official from SK Energy said.