No big subsidies, no buyers

No big subsidies, no buyers 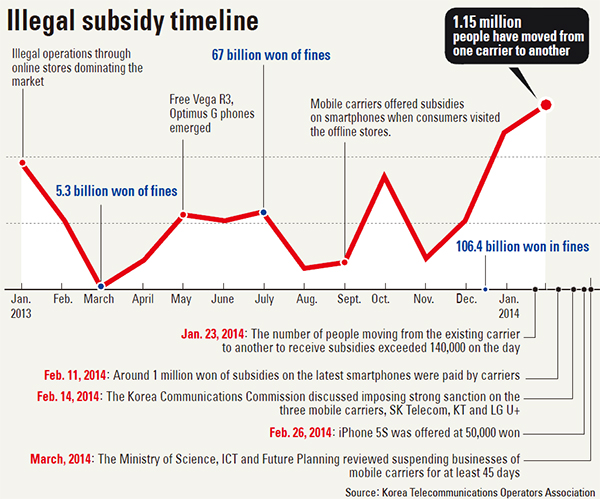 Although Gangnam Station in southern Seoul was crowded as usual during the weekend, most smartphone stores were quiet on Sunday, Feb. 2.

A clerk at a store that advertised “Free Smartphone” said mobile carriers are not offering huge subsidies at the moment, perhaps because the government is set to impose a sanction. The clerk said he would call when there is another big subsidy.

Big subsidies have also been scarce on the Internet.

On Feb. 11, according to the mobile communications industry, keywords such as “Feb. 28 chaos” and “March 1 chaos” heated up Internet portals as people expected large subsidies to be offered on those days.

However, nothing happened, and rare was the retailer that would provide a subsidy of more than the 270,000 won ($252) ceiling set by the Korea Communications Commission.

“I don’t understand that smartphones that were sold at 100,000 won only four to five days ago are now 400,000 won to 500,000 won,” said a 33-year-old surnamed Han, who went to Gangnam Station to purchase a smartphone. “Due to the debate over excessive subsidies, consumers are the ones experiencing difficulties.”

When the Ministry of Science, ICT and Future Planning suspends businesses for mobile carriers this month as a penalty for excessive subsidies, consumers will likely experience more inconvenience.

The Science Ministry is discussing measures to prohibit mobile carriers from accepting new subscriptions and subscribers from other carriers for at least 45 days.

Samsung and LG worry that sanctions will stunt the sales of new smartphones like the Galaxy 5S and G Pro 2.

The Association of Mobile Communications Retailers issued a statement condemning a long-term business suspension for mobile carriers, saying it would lead to layoffs of 300,000 employees.

“The mobile carriers break the rule and we are the ones punished,” said the statement.

Some even say a suspension would not be all bad for the carrier, which would save on marketing costs.

“Some mobile carriers are manipulating public opinion,” said a spokesman for the Ministry of Science, ICT and Future Planning, implying there will be no change in its stance for imposing strong sanctions.

“We are considering various situations in the market. Smartphone manufacturers and retailers are all accomplices in the crime. It is not right that they now behave as victims.”

Meanwhile, the Mobile Device Distribution Improvement Act that has been cited as a measure to counteract the side effects of the excessive subsidies, failed to pass the National Assembly due to differing opinions of the ruling and the opposition parties regarding the Broadcast Act.

Considering that the National Assembly is not likely to operate smoothly ahead of local elections in June, whether the act will be passed and enforced is unclear.

As there is a grace period of six months for the Mobile Device Distribution Improvement Act, it will be implemented next year if the bill is passed in the second half of this year.