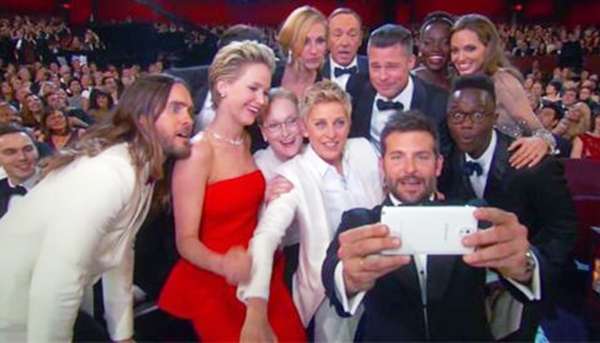 Ellen DeGeneres, fourth from left, and other actors and actresses pose for a group selfie with Bradley Cooper holding a Samsung smartphone during the Oscars at the Dolby Theatre in Los Angeles, United States. The group photo has created plenty of buzz for Samsung products.

Add Twitter, Samsung Electronics and Coca-Cola to the list of winners at last night’s Oscars ceremony for their product-placement coups.

Twitter, the microblogging site, was flooded with traffic after host Ellen DeGeneres waded into the audience for a selfie during the Los Angeles event broadcast on ABC.

She gathered up Meryl Streep, Jennifer Lawrence, Kevin Spacey, Jared Leto and Lupita Nyong’o, and handed her Samsung smartphone to Bradley Cooper to take the shot. The impromptu selfie set the record for the most-retweeted post ever and temporarily disrupted Twitter’s service for some users, bringing the microblogging site tons of publicity.

“We crashed and broke Twitter,” DeGeneres said later from the stage. “We made history.”

“If only Bradley’s arm was longer,” DeGeneres posted. “Best photo ever.”

The photo also got almost 1.9 million likes on Facebook.

Coca-Cola also got some unexpected publicity when DeGeneres ordered pizza for the show’s attendees. The box, with a logo of the brand printed on the side, was shown on the telecast, which attracted 43 million viewers, up about 6 percent from last year, for its biggest audience in a decade, ABC said today, citing Nielsen data.

Coca-Cola pulled out of this season’s Oscars after years hawking Diet Coke to the show’s female-skewing television audience. PepsiCo filled the void, pushing its Pepsi-Cola mini cans with a cast of big name stars like Cuba Gooding Jr.

So it was a boon for Coke that its logo caught the cameras as DeGeneres and a starstruck delivery man carried pizza from Big Mama’s and Papa’s Pizzeria to the likes of Pitt, Harrison Ford and Kerry Washington.

“Big Mama’s & Big Papa’s Pizzeria is a longstanding Coca-Cola customer,” said Lauren Thompson, a spokeswoman for Atlanta-based Coca-Cola, yesterday in an email. “We were surprised and delighted to see them appear during last night’s Academy Awards and think they did an outstanding job of bringing some extra fun and excitement to the show.”

Big Mama’s, a Los Angeles-based chain with 20 locations, wasn’t forewarned. The restaurant’s Hollywood outlet received the pizza order that night much as it often does, according to Wayne Grigorian, who works in the corporate office for the privately held chain. Normally, he said, the delivery people drop the pies off at the backstage door. This time the employee was invited into the theater.

DeGeneres’s use of a Samsung Galaxy Note 3 for the group photo wasn’t happenstance. Samsung was a sponsor of the Oscars and used the show to introduce its “One Samsung” campaign highlighting a range of products including the Galaxy Note Pro tablet, Galaxy S5 smartphone, Gear 2 smartwatch and a curved ultra-high definition TV.

The Oscar sponsorship included use of Samsung’s products during the show, said Ashley Wimberly, a U.S. spokeswoman for the company.

“What that product integration was going to be, we weren’t 100 percent clear on,” she said.

Samsung phoned DeGeneres yesterday and suggested making a $1 donation to her favorite charities for every retweet, Wimberly said. She agreed, and Samsung is donating $3 million to be split between the Humane Society and St. Jude Children’s Research Hospital.

“We wanted to say thanks for doing this,” Wimberly said. “It was an incredible moment.”

Altogether, there were 17.1 million Oscar-related tweets during the show, San Francisco-based Twitter said yesterday in a blog post.

The academy, which organizes the awards, took credit for the Twitter outage.