At 91, Samyoung Chemical founder giving it all away

At 91, Samyoung Chemical founder giving it all away 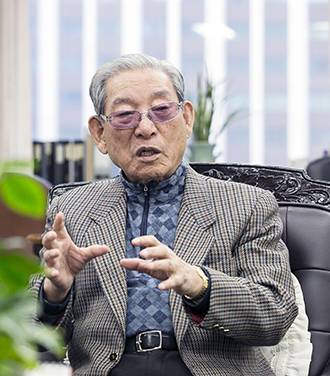 Lee Chong-hwan, the honorary chairman of Samyoung Chemical, is well known for being tight with money. When we met, he was wearing a jacket that looks like he must have had it on for more than 10 years. On his wrist was an old, cheap watch.

Samyoung Chemical is not a household name like Samsung or LG, but it was the nation’s first petrochemical company when it was founded in 1959. Today, the company has expanded into films, laminates and electrical wires.

Lee, the 91-year-old founder and honorary chairman, is also known for his astronomical donations, including the 800 billion won, or $746 million, he has given to scholarship foundations.

Additionally, Lee created an education foundation in 2000 under his name, providing scholarships to students. Last year, he donated 60 billion won to Seoul National University to build a new library.

Although Lee is media shy and often politely refuses media interviews, he sat down with the JoongAng Sunday to discuss his recent donation to Seoul National University as well as other more personal issues. He sat for the interview in his small 35-square-meter (377-square-foot) office that he shares with his eldest son, Lee Seok-joon, the current chairman of Samyoung.

From the beginning of the interview, which ended at a Chinese restaurant that he frequently goes to, the honorary chairman was blunt, and he kept up that frank style throughout the three hours we talked.

“I don’t do interviews,” he said when I arrived at his office. “It seems you’ve made this trip in vain.”

But then he changed his mind immediately, “since you’re here anyway,” and we started the interview.

Despite his old age, he remembers dates and figures clearly. The only problem he had was his hearing. Lee became partially deaf in 1987 after he was tortured by agents of the National Intelligence Service. Since then he has had to wear a hearing aid.

Q. You’ve donated roughly 95 percent of your personal property, about 800 billion won in cash and real estate, to scholarship foundations. Do you feel any regrets toward your children?

A. [He briefly looks at his daughter-in-law, Yang Moon-hee, who attended the interview.] It’s not like I don’t know how you guys feel. However, you can’t [inherit it]. You guys are now in your 50s and 60s and it’s not like you are going to start a new business with the money I leave you. I left you enough to live a prosperous life. Nowadays I’m busy trying to collect about 30 billion won [to donate to scholarship foundations.]

We heard that you donated 60 billion won to build a new library at Seoul National University and that when you met with the university’s president, Oh Yeon-cheon, you made him a promise.

That’s why I have no money with me. I even sent some of the people to [libraries] overseas so that they could build a proper one. I made the decision on the location as well as the look. Shouldn’t the person who pays the most think about it the most?

(Roughly 80 percent of the scholarships handed out by the Lee Chong-hwan Education Foundation go to students who are studying basic science.)

You don’t hand out scholarships to medical school or law school students. Why is that?

It is important to create something that adds to the nation’s production and feeds the country, that’s why science comes first. But in future there could be some changes made.

(Lee received an honorary doctorate from Seoul National University on Jan. 31. He seemed worried that the honorary title might be conceived as being in return for his hefty contributions.)

I really thought long and hard about whether I deserve it. But in the end I came to the conclusion that I have made some contributions to the country in my own way.

(Lee went on to say that his contribution included expanding the export market, such as when he shipped out vinyl packaging in the 1970s that was used for wrapping clothing, as well as succeeding in localizing the insulation installed on power transmission towers and supplying cable wires to Posco at a low price.)

Aren’t there any other contributions you’ve made to the country?

Of course there are. I tried to help North Korea. Fifteen years ago we met North Koreans in China and Cambodia while providing the machinery that makes vinyl wrapping for clothing products.

I met Jang Song-thaek [the late uncle of current leader Kim Jong-un, who Kim ordered to be executed late last year]. We tried to donate the machinery, but the problem was the electricity supply. So we tried to give power generators, but then they didn’t have fuel. It dragged on for 10 years, and we finally gave up.

At the time, they invited me to North Korea. But why would I go to meet Kim Il Sung’s son? I told them I wouldn’t. Recently we sent a letter to the Blue House so we could try again [to donate the vinyl manufacturing machinery].

There’s a rumor that you frequently eat jjajangmyeon [noodles in black bean sauce] to save money.

That’s a lie [created by the media]. I don’t eat jjajangmyeon that much. I like foods that are nutritious. I frequent hotels to eat.

(When we asked the owner of the Chinese restaurant where Lee is a regular, the owner said Lee often eats jjajangmyeon or udon.)

We’ve heard that you traveled by economy class until just five years ago.

(It is known that when his employees suggested that Lee should travel by business class, the chairman responded by asking, “Does the plane travel faster if I sit in business class?”)

[Showing his teeth] These are all mine. Not a single tooth has rotted. My knees don’t hurt and I have no diseases that accompany old age, like high blood pressure. I did lie down in a hospital bed few years ago, as I was frequently getting colds. The doctor told me to take vitamin C, which I have been taking since. In the last couple of years I haven’t caught a single cold.

There were news reports a couple of years ago that you were the oldest golfer in Korea to achieve a hole-in-one. Do you golf nowadays?

A few days ago I went to Jeju, where I played for three days straight. My driver recently shortened to roughly 180 yards. But my golf scores are almost the same as my age.

(Lee owns a golf course in Jeju, Jeju Crown CC, but he donates all of its profits to a scholarship foundation. According to employees, Lee usually uses the nine-hole public course instead of the 18-hole member course. He allegedly chooses the nine-hole because he is worried that the golf course would make less money if he played the member course.)

How much do you plan on expanding your education foundation?

If I live five more years, I could increase [the foundation assets] to 1 trillion won. We’re currently working on some remodeling here and there in the building to raise its value. It should be done while I’m still alive.

When you received your honorary doctorate at Seoul National University, you mentioned creating an award in your name.

Nobel Award recipients get roughly $1.2 million each. I believe we should also create an award of similar size to those who have made astonishing achievements in the humanities, science and practical studies.

The award should be limited to those in the East Asian region, most likely from China, Japan and Korea. I’m planning to start such an award in 2017, but it’s still just in the preparation stage.