‘Comfort women’ on the agenda at council session

‘Comfort women’ on the agenda at council session 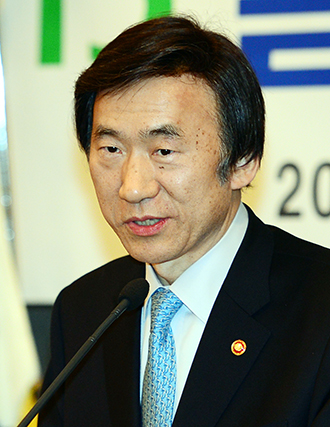 The Korean minister of foreign affairs is scheduled to address the UN Human Rights Council today in Geneva for the first time in eight years, to raise the “comfort women” issue to the international community and send a strong message to Japan.

Foreign Minister Yun Byung-se kicked off a three-day trip there yesterday to attend the 25th session of the council. He is expected to emphasize the need for a timely and speedy resolution concerning the Japanese military’s forceful recruitment of women and girls into sexual enslavement during World War II, the Ministry of Foreign Affairs said yesterday.

Yun is scheduled to make his keynote address today in Geneva, where it is anticipated that he will “urge Japan to resolve the matter of sexual slavery by the Japanese military, which is a universal human rights issue - not just from the past, but still relevant today,” the ministry added.

Seoul has called for Tokyo to apologize to and compensate those victims, euphemistically known as comfort women, who are now mostly in their 80s and 90s.

“Our government is handling the issue of these victims as a very important item. Therefore, we are strongly requesting that the Japanese government speedily resolve this.”

In his address, Yun will also touch upon the current international rights situation, it said, and will share his assessments and position on human rights issues in North Korea, based on a February report by the Commission of Inquiry that was released after a yearlong investigation.

This is first time since 2006 that a foreign minister has appeared at a session, when UN Secretary General Ban Ki-moon, who served as foreign minister from 2004-6 in the Roh Moo-hyun administration, attended the council.

The 47-nation Geneva-based council’s 25th session opened Monday with a four-day, high-level segment attended by ministers and other senior dignitaries.

Highlights will include presentations by the Independent Commission of Inquiry on Human Rights in the Democratic People’s Republic of Korea, which released a report last month detailing human rights abuses in the reclusive state and recommending action by the International Criminal Court (ICC).

The council session, which was inaugurated by UN Secretary General Ban, runs through March 28.

In the last seven years, the Foreign Ministry has sent a vice minister or a deputy minister for multilateral and global affairs.

This year Shin Dong-ik, head of multilateral affairs, was originally scheduled to represent Korea, though Yun’s visit appears to be a reaction to extremist actions by Japan’s leadership, particularly in regard to its challenging of the Kono Statement of 1993.

The statement, released by Yohei Kono, Japan’s chief cabinet secretary at the time, on Aug. 4, 1993, effectively apologized for the physical and psychological damages and indignities suffered by Asian women recruited by the imperial government to serve as sex slaves for the military during World War II.

“The minister originally considered attending the session,” a foreign affairs official said, “and upon another examination, there were important items on the agenda for this session and it proved to be a good opportunity for the minister to speak about our rights policy to the international community.”

“There seems to be higher participation this year,” said a foreign affairs official, as Ban and more than 50 foreign ministers are to attend. Yun’s Japanese counterpart, Foreign Minister Fumio Kishida, however, is not scheduled to make an appearance.

On Saturday, President Park Geun-hye used her March 1 address, commemorating the 95th anniversary of the 1919 uprising against Japan’s colonial rule that lasted from 1910 to 1945, to send a strong message to Japan to face up to its history, especially concerning moves by its government to disavow the Kono Statement.

But on Monday, Yoshitaka Sakurada, Japan’s senior vice minister of education, culture, sports, science and technology, made remarks indicating that Korea’s victims of sexual slavery had “fabricated” their testimonies, which drew a sharp response from Seoul. He made those remarks at a rally Monday demanding the revision of the Kono Statement led by the Japan Conference, an ultra-partisan right-wing group that includes politicians. The rally was attended by more than 500 local and national lawmakers, Japanese media reported yesterday.

“I am a person who really hates lying, or deceiving people, or fabricating the truth,” he said about the revision plans proposed at the rally, indicating that the testimonies from the victims collected in a Japanese government initiated investigation in 1991 were lies.

The Shinzo Abe administration last week said that it plans to re-examine the testimonies made by Korean comfort women, an implication that it could overturn its official apology.

In response to the vice education minister’s remarks, the Korean Foreign Ministry released a statement yesterday that read, “After the Japanese Chief Cabinet Secretary [Yoshihide Suga] said that the details of the Kono Statement will be re-examined, now the education vice minister - who should be teaching the young generation correct history - is attending, in person, a mass rally that is instigating the disavowal of the Kono Statement and agreeing with it. The surviving 55 victims, the international society and history know who is lying, who is deceiving people and who is fabricating the truth.”

The statement further said that Japan’s political leaders, by saying they will succeed the Kono Statement while taking contrary action, “makes a mockery not just of the victims, but the United Nations and international society, who asked that Japan take responsible action on the comfort women issue.”