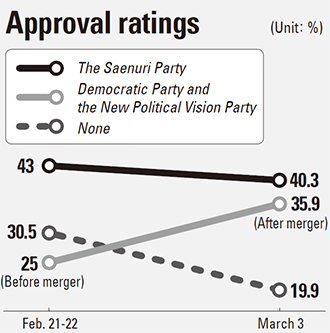 A poll by the JoongAng Ilbo on Monday showed that Koreans have divided views on the merger announced Sunday between the main opposition Democratic Party and the emerging political faction led by independent lawmaker Ahn Cheol-soo.

According to the survey of 964 adults nationwide, 37.9 percent answered that the decision to unite was a “good thing,” whereas 42 percent responded that it was the wrong move.

The remaining 20.1 percent either declined to answer or had “no idea.”

But the results varied significantly when it was subcategorized according to the parties the respondents supported.

Among those who stand by the ruling Saenuri Party, 71 percent came up with a negative response, while 70 percent of DP supporters answered positively to the merger.

On the other hand, 36.6 percent of adults who support neither political party answered negatively, with 27.6 percent answering positively.

When it came to approval ratings for the respective parties, the DP-Ahn alliance, which has not yet been formally launched, garnered 35.9 percent - only 4.4 percentage points lower than the Saenuri.

Those who answered “none” tallied 19.9 percent.

In the same poll, previously conducted by the JoongAng Ilbo from Feb. 21 to Feb. 22, the Saenuri obtained 43 percent, trailed by the DP at 11.1 percent and Representative Ahn’s political group at 13.9 percent. A whopping 30.5 percent answered none at the time.

The comparison of results from the two polls indicates that more than one-third of those who preferred no political party, as well as some of the Saenuri supporters, migrated to the new party, which is widely predicted to pursue a liberal political agenda, similar to the current DP platform.

The Monday poll also suggests that the united party would affect the upcoming June 4 local elections. The announcement of the merger led 16.7 percent of the respondents to change their minds about who to pick at election time, whereas 72.1 percent answered that there would be no change.

When asked whether the political alliance would work negatively against the Saenuri, 43.3 percent believed it wouldn’t make a difference, whereas 31.5 percent answered “yes.” Only 16.3 percent said the merger would give the ruling party an advantage.

Meanwhile, Representative Ahn yesterday visited Jeonju, North Jeolla, to explain his new party and warned the DP that he would not lose his grip on leadership in the merged party, which has yet to be launched.

“If there is anyone who is sighing with relief from the thought that he or she could settle for vested rights again now that the competition is over, I would warn, with my colleagues, that it is an absolute misjudgment in the name of ‘new politics,’” he said.