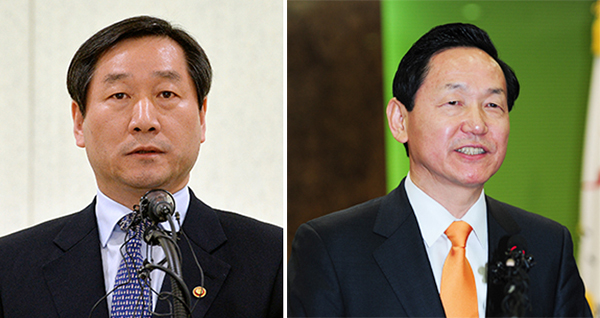 Several government officials and politicians are gearing up to announce their plans to run in the local elections three months from now. Competition in the leadup to the polls between the ruling party and liberals is expected to be fierce, particularly following the political merger over the weekend between the main opposition Democratic Party and the faction led by independent lawmaker Ahn Cheol-soo.

Two aspiring contenders unveiled their intentions to campaign yesterday. Kim Sang-gon, superintendent of the Gyeonggi Provincial Office of Education, announced that he would step down to run for the Gyeonggi provincial governor post as a candidate for the new political party, the result of the liberal coalition between the DP and Ahn.

In addition, Yoo Jeong-bok, the minister of security and public administration, stated later in the day that he would tender his resignation to run in the Incheon mayoral race. He is one of President Park Geun-hye’s close aides and will represent the ruling Saenuri Party. He will officially announce his plan today.

“I am departing for a new path to create a happy republic that our children will be living in,” Superintendent Kim said in a press conference yesterday morning. “Based on the experience of revitalizing the livelihoods of people through educational innovation, I have now hit the road to create a new order in Korea’s politics, society and economy.”

Regarding the new political party, plans for which DP Chairman Kim Han-gill and Representative Ahn unveiled on Sunday, the former business administration professor from Gwangju, South Jeolla, said the alliance has “built an ember of hope in the heart of the people.”

He added that it would go as far as to change the historical flow within civic society.

Two lawmakers with the liberal Democratic Party, Won Hye-young and Kim Jin-pyo, previously announced their plans to run for the Gyeonggi post and welcomed another rival in the race within the party. Though, at the same time, they advised that Kim be fair in the competition.

The Gyeonggi gubernatorial post is the second most contested position in the local polls, just behind the Seoul mayoral post. Seven-term Saenuri lawmaker Chung Mong-joon declared on Sunday that he would join the race for Seoul mayor, emerging as the strongest candidate so far against incumbent Mayor Park Won-soon, who is set to run for re-election.

Saenuri Representatives Won Yoo-chul, Choung Byoung-gug and Kim Young-sun, the former leader of the Grand National Party - the former ruling body of the Saenuri Party - all made public that they would also run for the Gyeonggi governor post. Another Saenuri figure, Nam Kyung-pil, is expected to announce his candidacy plans today.

Yoo, the minister of security and public administration and an Incheon native, said in a press conference yesterday afternoon that he has been placed in a situation where he cannot avoid the “political order to run for the Incheon mayor post,” given that he was one of the major contributors to President Park’s election success.

In the wake of the announcement on Sunday that the DP and Ahn’s political faction would unite against the ruling party, the Saenuri’s leadership has been strategically pushing big political figures to stand for the elections, according to sources.

This has caused some friction within the party, with some lawmakers complaining that their efforts are overstretched.

Ahn Sang-soo, the former mayor of Incheon who has already registered himself as a preliminary candidate for the Saenuri Party, told reporters yesterday that Incheon citizens and party members are concerned whether Yoo is “severely ignoring” Incheon, given that the minister has so far been politically active entirely in Gyeonggi.

Preliminary registration of candidates for the local elections kicked off on Feb. 4 across 17 regions nationwide and will close on May 14.

For incumbent lawmakers to become mayors or governors, they must first withdraw from their current posts. Official registration is scheduled for May 15 and May 16, when the list of candidates will be finalized.