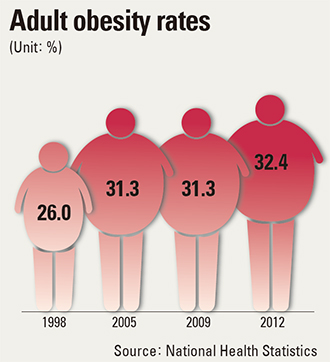 An obese 27-year-old man identified only by his surname Min says he struggles with the social stigma and disadvantages associated with being overweight.

“Many people point at me and talk behind my back, saying, ‘What’s the point of living like that?’ Younger children approach me and spit out words like ‘pig,’?” Min said.

The burden makes him stay at home most of the time.

Min also believes that his heavy weight has hurt his ability to find a job.

“I usually pass the first session of the hiring process, where employers only examine my resume and documents,” he said. “But whenever I had a face-to-face job interview, I couldn’t make it through.”

One prospective employer even said, straight out, that the main reason Min was not getting the job was because of his size.

But Min’s problem is growing more common, as obesity rates have been rising over the past fifteen years and the extreme obesity rate has more than doubled, according to a study released yesterday by the Ministry of Health and Welfare.

In Korea, people are categorized as obese when their body mass index (BMI) tops 25. Those higher than 30 are considered “highly obese.”

BMI is calculated by dividing a person’s body weight in kilograms by the square of one’s height in meters.

A 34-year-old woman surnamed Lee recently quit her job as a care worker at a nursing center. At 168 centimeters tall and weighing 113 kilograms, she says that her colleagues were hostile toward her mainly because she was overweight.

“If I moved in a narrow aisle, my coworkers would hysterically tell me ‘Watch out’ or ‘Don’t push things over,’?” she said.

“It was really embarrassing, and I thought it’d be better to quit the job.”

With the increasing prevalence of obesity, experts are beginning to examine the social and economic factors linked with weight more closely. They found that people with low income levels are associated with higher obesity rates.

Obesity rates for people in the bottom income level stood at 34.3 percent in the 2012 data, whereas the figure for those in higher-than-average income baskets was 29.5 percent.

“The reason poorer people are more susceptible to obesity is that they are more likely to eat junk food,” said Oh Sang-woo, a doctor at Dongguk University Hospital in Ilsan, Gyeonggi. “It’s a vicious cycle. They usually don’t have enough time or money to do work out, so they become more overweight.”