Rockets keep James in check, get win over Heat

Rockets keep James in check, get win over Heat 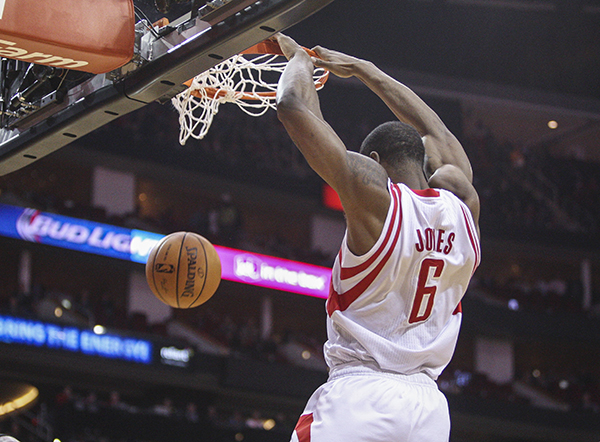 Houston Rockets’ forward Terrence Jones dunks during the first quarter against the Miami Heat at the Toyota Center on Tuesday. [USA TODAY/NEWS1]

Dwight Howard had 22 points and 16 rebounds, James Harden added 21 points and the Houston Rockets held LeBron James in check Tuesday night in a 106-103 win over the Miami Heat.

James had 22 points, one night after setting a club record with a career-best 61 against Charlotte. He acknowledged before the game that he was “extremely tired” and that he spent most of the day sleeping.

He had 19 points by halftime but appeared to drag at times in the second half and spent the first half of the fourth quarter on the bench.

Still, the Heat cut their deficit to three when Michael Beasley hit a 3-pointer with 21.2 seconds left. Harden threw the ball away after that, and Howard accidentally hit James in the face when they both went up to try to grab a long pass.

James lay on the court holding his broken nose for a few seconds before getting up and slowly walking to the bench. He remained in the game after a timeout but missed a desperation 3-point attempt at the buzzer that would have tied it.

The four-time MVP has been wearing a protective mask to protect his nose.

Dwyane Wade had 24 points for the Heat after sitting out Monday night. Beasley also scored 24.

Miami never led but tied it twice in the fourth quarter. Houston used an 11-2 spurt to take a 104-95 lead with less than 3 minutes remaining.

Houston led by 13 early in the fourth before two separate runs by the Heat tied it at 91 with 7 minutes remaining. The Heat also tied it at 93 before Houston used its late run to close it out.

The Heat had made consecutive 3-pointers to cut the lead to seven early in the fourth quarter when Chris Andersen blocked a shot by Donatas Motiejunas. Andersen stood under the basket after the block and taunted Motiejunas, drawing a technical foul.

Houston opened the second half with a 9-2 run, capped by a dunk by Chandler Parsons over James. Shane Battier had a basket for Miami after that, but Houston reeled off six straight points to extend the lead to 68-56.

An airball on a 3-point attempt by Wade was one of three missed shots by the Heat in that span.

The Rockets were up by nine soon after that when Harden launched a long alley-oop to Howard, who barely grabbed it in time to sail over Chris Bosh for the dunk.

Howard picked up a foul with about 5 minutes left in the first half when he ran into James as he was driving to the basket, causing him to lose control of the ball.

A reverse layup by James and a free throw by Wade in the last 20 seconds of the first half cut Houston’s lead to 53-52 at halftime.