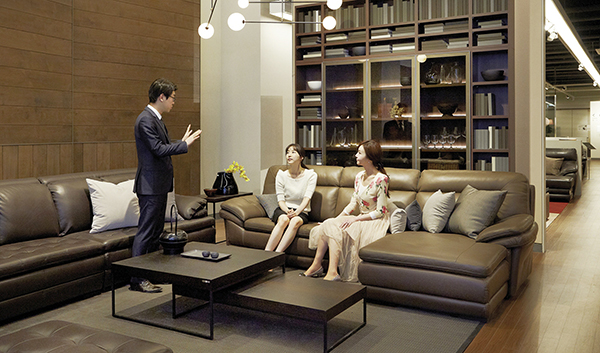 A Hanssem space coordinator consults with consumers yesterday at the new Mokdong store. Provided by the company

Yesterday morning, shop assistants at Hanssem’s new flagship store in Mokdong, western Seoul, were busy arranging inventory ahead of its opening today. They seemed as determined and excited as company Chairman Choi Yang-ha.

“We started our business as a supplier of kitchen furniture in 1970 and last year, for the first time in the furniture industry, we reached 1 trillion won [$934 billion] in sales,” Choi said at a press conference. “We would like to become a worthy global interior company by pursuing innovation.”

The store opening today comes almost nine months before the opening of Ikea’s first Korean store in Gwangmyeong, western Gyeonggi. The Mokdong store is 20 minutes by car from the site of the Sweden-based retail giant.

But Choi said that wasn’t intentional. “We decided to open a flagship store in Mokdong thinking about the market [potential],” he said. “Come to think of it, it could also be to counter Ikea.”

Ikea, a manufacturer of furniture, appliances and home accessories, also plans a second store in Goyang, Gyeonggi, and is waiting for approval for a third store in Gangdong District, southeastern Seoul.

“We have information that Ikea is also looking at opening a store in Busan,” said Kim Yong-ha, director of Hanssem’s interior sales department. “We expect Ikea to expand its number of stores to between seven and nine, like Japan.” 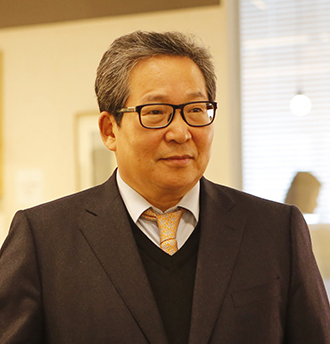 “We pursue a system in which we are responsible for the whole process - sales, distribution, assembling and service,” Kim said.

Located on 5,680 square meters (1.4 acres) of land, the store has two underground levels with displays of home accessories and light furniture such as lamps and kitchenware, and six floors that display not only kitchen furniture, sofas, dining tables and beds, but a 33-pyong (1,173-square-foot) model house. The new store also has a bakery.

“The trend in the furniture industry is changing,” Kim said. “In the past, furniture stores sold only furniture, but now they also sell almost all home necessities and appliances.”

Hanssem plans on expanding the number of its flagship stores to 20. Its first store was in Bangbae, southern Seoul, which opened in 1997, followed by stores in Nonhyeon in southern Seoul, Bundang in Gyeonggi, Jamsil and Busan.

The company is also thinking of tapping into the overseas market starting with China.

“If we do open a store in China, it will be in Shanghai,” said a company official. “We are studying the market and our goal is to decide whether to open or not in two years.”

Meanwhile, according to Choi, in the long term, Hanssem plans to expand its stock of home accessories in response to the growing number of families that prefer built-in furniture.

“As for Ikea, the portion between furniture and home accessories [sold at their stores] is 50 percent to 50 percent, whereas for us it is 70 percent to 30 percent,” the chairman said.

He said he visited an Ikea store in Japan and “believes there is lots to learn from the [Swedish] company.”