Hyundai chairman back in Europe

Hyundai chairman back in Europe 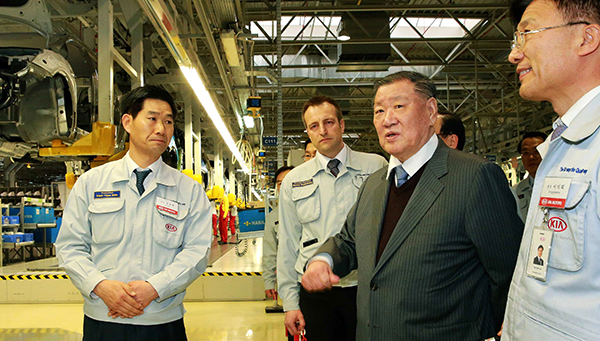 Hyundai Motor Group Chairman Chung Mong-koo talks to employees Tuesday at Kia Motors’ plant in Zilina, Slovakia. Chung is on a three-day trip to Europe to check on market conditions and review company strategy. Provided by the company

With the European auto market showing signs of recovery, Hyundai Motor Group Chairman Chung Mong-koo is again on the continent to check on preparations by Hyundai Motor and Kia Motors.

The chairman visited Europe in October, but as competitors start to boost their marketing in Europe, the 76-year-old Chung left Korea on Tuesday for a three-day trip,

He visited Kia’s plant in Slovakia and Hyundai’s plant in the Czech Republic before going on to the group’s European headquarters in Germany to be briefed on sales strategy. He will visit Russia today to inspect Hyundai’s plant, which is gearing up to produce the upgraded version of the Solaris subcompact.

Chung said the European auto market, which saw sales decrease over the past six years, is starting to recover, but the competition is getting fierce.

Hyundai and Kia have done well in Europe, increasing their combined sales by 36.1 percent during the last six years and their market share from 3.5 percent in 2007 to 6.2 percent in 2013.

“Since demand from the European market is expected to grow and so is competition, we should not be satisfied with our past achievements, but reorganize in all sectors and prepare for new competition,” Chung told employees. “If the past six years were about expanding sales, now is the time to keep up the performance and reinforce our basic competitiveness to take root in this market.”

During his visit, Chung will inspect the quality of vehicles and check whether the factories can flexibly manage production volume based on market demand. Cooperation with local suppliers is also expected to be a point of emphasis.

“We need to review the competitiveness of models that performed well in the market and set localized marketing plans for new models,” he said. “We also need to establish our premium brand image through the release of the new Genesis in Europe.”

The combined 2014 sales goal for Hyundai and Kia in Europe is 750,000 units, up 1 percent from a year ago. Their plants in Europe produced 616,000 units last year while operating at full capacity.

Auto sales in Europe have declined since 2008 to 13.74 million vehicles last year. However, according to data from the Korea Automobile Research Institute, sales should increase 2.9 percent to 14.14 million units this year. From September to January, auto sales in Europe increased year-on-year.

Hyundai expects fierce competition as global carmakers are expected to introduce twice as many new models as in 2013, including small sport utility vehicles.

“European companies are coming up with aggressive financial promotions, such as low-interest loans, while Japanese automakers are enhancing incentives backed up by weak yen and boosting their hybrid lineup,” Hyundai said in a statement. “We will compete with new cars localized for Europeans.”