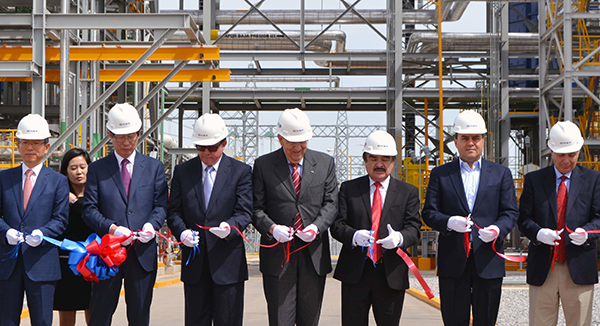 Cho Hwan-eik, CEO of Korea Electric Power Corporation, third from left, cuts a ribbon yesterday to celebrate the completion of a 433-megawatt combined-cycle power plant in Chihuahua, northern Mexico. Photo by the company

The company said yesterday that the new power plant, in which it has a 56 percent stake, will help Kepco make inroads in Latin America, and is expected to generate a total of $210 million in net profit over the next 25 years.

The Norte II combined-cycle power plant in Chihuahua, 1,200 kilometers (745 miles) north of Mexico City, was ordered on a build, own, operate contract.

Mexico’s independent power generation market has been dominated by Spanish and Japanese companies.

The latest project was the first for a Korean consortium led by Kepco and Samsung C&T.

In winning the contract over Iberdrola, Abengoa, Mitsubishi and Mitsui, Kepco credited strong financial support from the Export-Import Bank of Korea.

The Mexican government will purchase all power produced by the plant as well as provide price guarantees, which makes the deal a safe source of profit for Kepco.

The country’s per capita power consumption was 2,319 kilowatt hours in 2012, about a quarter of that of Korea. Total power demand is forecast to grow gradually by an estimated 3.3 percent annually.

“Kepco will actively participate in Mexico’s future power plant projects with the aim of expanding to other countries on the continent,” said Cho Hwan-eik, CEO of the public power company, in a ceremony marking the completion of the Chihuahua plant.