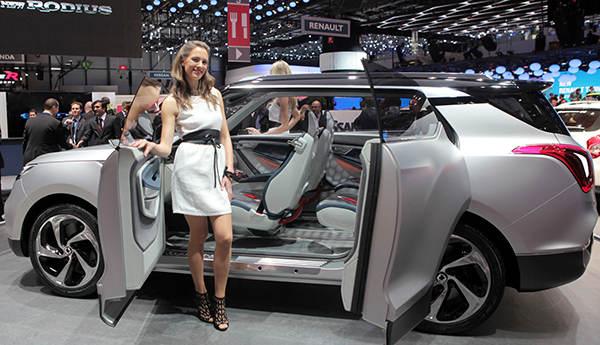 Ssangyong Motor’s small SUV, the XLV, is among 20 concept cars on display through March at the Geneva International Motor Show. The vehicle features an innovative and flexible 2+2+2+1 seating configuration. Provided by the company

More and more automakers are rolling out concept cars on the motoring world’s biggest stages, and Korean companies are getting in on the act at the 84th Geneva International Motor Show, which will feature some 20 futuristic vehicles.

The XLV could be called a bigger version of the XIV-1 concept the company presented at the Frankfurt Motor Show in 2011. The XLV is 290 millimeters (11.4 inches) longer than the XIV-1 and is designed for seven passengers with an interesting 2+2+2+1 arrangement, where the seventh seat slides between the second and third rows for optimum flexibility.

Ssangyong, owned by India’s Mahindra, said the XLV will produce lower CO2 emissions because of its 48V hybrid system that combines a 1.6-liter diesel and a 10 kilowatt electric motor powered by a 500 watt-hour lithium-ion battery.

Ssangyong Motor CEO Lee Yoo-il said a new model based on the XLV concept could be introduced late next year after the release of the X100 crossover utility vehicle.

Hyundai Motor, Korea’s largest automaker, is displaying 16 models at its 1,547-square-meter (1,850-square-yard) exhibit, including the global debut of its fuel cell concept Intrado.

Developed under the code name HED-9, it is the ninth concept car created by Hyundai Motor’s European R&D center in Russelsheim in association with the Namyang R&D Center in Korea.

Hyundai’s Intrado is considered the next generation of the Tucson ix35 hydrogen fuel-cell vehicle, which went into production last year. Intrado has a next-generation hydrogen fuel-cell power train with a 36 kilowatt-hour lithium-ion battery that delivers the equivalent of 40 kilometers per liter (94 miles per gallon).

Hyundai said that Intrado’s body also includes carbon-fiber materials co-developed by Lotte Chemical and Hyosung. This is the first time that Korean-developed carbon fibers have been used in a car.

Carbon-fiber material is a quarter the weight of steel and 10 times stronger. Hyundai said its patent-pending carbon fiber frame is 60 percent lighter than that of a typical car.

The GT4 Stinger is equipped with a 2.0-liter turbocharged gasoline direct injected (T-GDI) four-cylinder engine that can produce 315 horsepower.

Including the GT4 Stinger, the nation’s second-largest automaker is displaying 15 models at the motor show.

It is also focusing on the European debut of the Soul EV which was introduced at the Chicago Auto Show last month.