Kim Yu-na surprises with news of a boyfriend

Kim Yu-na surprises with news of a boyfriend 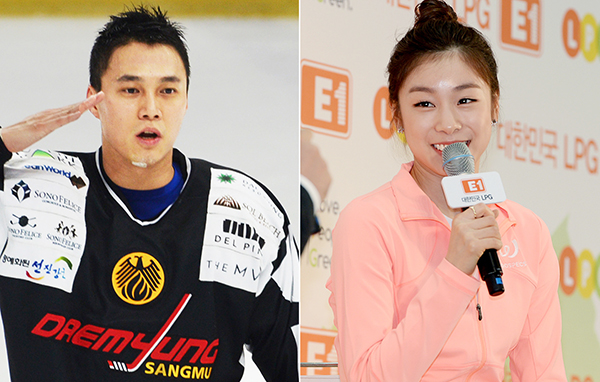 After the local entertainment news site Dispatch posted photos of the couple, claiming to have been tracking the two athletes since August, Kim’s agency went public with the relationship.

“Most of the media reports are true: Yu-na and Kim Won-jung are in a relationship,” said her agency All That Sports in a press release.

Long-rumored, the confirmation that Kim Yu-na has a boyfriend created huge buzz, with the story shooting to the top of the popular search lists on leading Internet portals.

Kim Yu-na, 23, met Kim Won-jung at the Korea National Training Center in July 2012, when she returned to the ice after taking a season off.

Four months later, Kim Won-jung, as a member of the national hockey team, was also training at the National Center, which is also known as Taereung National Village.

“As they are both Korea University alumni, they might have been able to relate to each other well,” said the Dispatch story.

“It’s not a mere coincidence that many skaters develop romantic relationships on the ice rink in Taereung, as it’s the only venue that can accommodate their training sessions,” said one sports analyst who asked to remain anonymous. “Besides, ice hockey is a masculine sport. It’s hard to resist those athletes once you see them playing in person.”

The 29-year-old hockey player has been playing for Daemyung Sangmu, the hockey team that is part of the Korea Armed Forces Athletic Corps, since last year.

“Won-jung is famous in the ice hockey world for his gorgeous looks,” said another expert. “When he played for the Anyang Halla ice hockey club, scores of Japanese fans visited Korea to support him during his games.”

Over the last few years, Kim Won-jung has established himself as a star forward in Korean ice hockey. At the 2011 Asian Winter Games in Kazakhstan, he helped the national team win a bronze medal, and last week his team won the ice hockey championship at the 95th National Winter Sports Festival. He says he hopes to play hockey at the Pyeongchang Olympics in 2018.

He’ll have his work cut out for him, though; Korea has never sent a national team to the Olympics.

As for Kim Yu-na, she was asked at a fan event on Tuesday how she feels about retiring. “Though I’m fed up with training for competitions, I’ll always support figure skating,” she said.