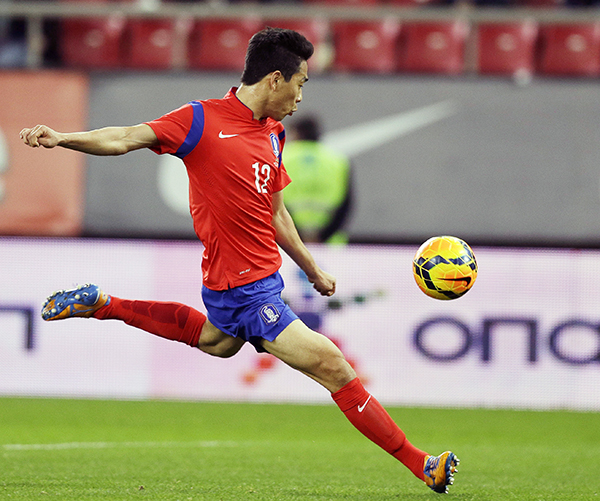 Striker Park Chu-young scores the opening goal against Greece during a friendly match Wednesday in Athens.[AP/NEWSIS]

ATHENS - Striker Park Chu-young, who was called up for the Korean national football team, for the first time in 13 months, made a huge comeback in a friendly match against Greece, scoring a goal that contributed to the team’s 2-0 victory.

In the match held at Karaiskakis Stadium at 2 a.m. yesterday Korea time, the Taegeuk Warriors overpowered Greece - No. 12 in FIFA’s world football rankings - just like they did at the 2010 South Africa World Cup, which Korea won 2-0, thanks to goals from the 28-year-old striker and “Sonsation” Son Heung-min of Bayer Leverkusen.

Under Hong’s favorite 4-2-3-1 formation, Park led the team’s offense as a one-top striker with three attacking midfielders: Son on the left wing, with Koo Ja-cheol of FC Mainz at the center and Lee Chung-yong of FC Wanderers on the right wing.

Korea and Greece challenged each other aggressively in the midfield areas soon after the match kicked off. Korea attempted to create scoring chances and to secure ball possessions by attempting many short passes.

In the 18th minute, Son delivered a beautiful lobbed pass to Park, who was penetrating into Greece’s left side of the penalty box. Park wasted no time as he had a one-on-one chance against the goalkeeper and volleyed the ball into the right corner of the net. It was his first A-match goal since November 2011 against the United Arab Emirates in the Asia preliminary round matches for the Brazil World Cup.

“I carefully checked Park’s physical condition in training sessions and judged that he is ready to play as he communicated with teammates well and followed the game tempo,” Hong said after the match. “I wanted to give him more time, but I had to replace him with Kim Shin-wook due to an injury [on his left knee]. He showed what he has and he understood what I wanted from him on the field.”

Kim replaced Park after the first half. Korea Football Association sources said Park complained about pain in his left knee, but he didn’t say how serious the injury was. Park didn’t appear at the post-match interview.

“Park showed that he was the type of striker that Hong has been looking for,” football analyst Park Moon-seong said. “Hong has been looking for a striker like Wayne Rooney of England, who often comes down to midfield areas to make short passes with midfielders and who can penetrate into the opponents’ area with speed, rather than the Peter Crouch type of striker who mostly waits for midfielders’ long and high passes inside the penalty box. And Park answered those demands yesterday.”

However, the analyst added that Park needs to play more matches for his club. “When I see him trapping and dribbling the ball, I was able to see that he isn’t back in perfect shape,” he said. “Such things will not be a big issue if he gets more playing time with his club [Watford FC], but he must be physically prepared to play to earn more playing chances.”

The other star player was Son. After assisting on Park’s goal in the first half, Son scored Korea’s second goal in the 55th minute. Koo Ja-cheol saw Son penetrating into the left side of the penalty box and delivered an accurate through-pass to him.

Since he was first called up by Hong in September for a friendly versus Haiti, Son, 21, has been the team’s leading scorer, with four goals.

“I feel very happy that I assisted on Park’s goal,” Son said. “I want to contribute more to the national team in the Brazil World Cup. I will try to cooperate more with teammates.”

But the four defenders, Kim Jin-soo, Hong Jung-ho, Lee Yong and Kim Young-kwon, looked like they need to improve their performance. They often gave up space to their opponents and failed to cut crosses coming in from both sides.

“Since the four haven’t played together many times, some of the defenders sometimes stayed in the wrong positions,” analyst Park said.” I think having a veteran defender, Kwak Tae-hwi, for instance, who can lead these young defenders, could be a solution.”