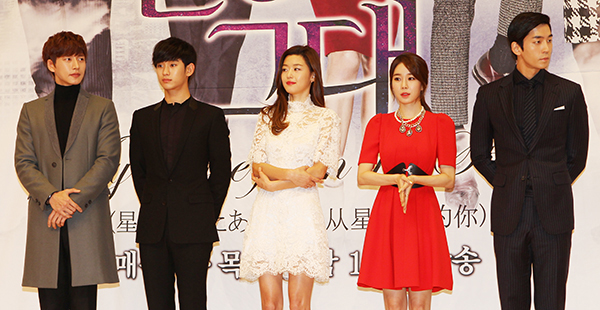 Actress Jun Ji-hyun, center, the lead actress in “My Love From the Star,” has gained a huge following all over Asia, especially in China. [Ilgan Sports]

I am not much of a TV drama fan. But once every couple of years, I get addicted to some program. This time, I fell under the spell of the SBS hit “My Love From the Star.” Every Wednesday and Thursday, I felt agitated and checked my watch when evening appointments dragged on, lest I miss the 10 p.m. show. I can enthusiastically join in on the lively discussions about the female character Cheon Song-yi, played by Jun Ji-hyun, a haughty and sassy actress who falls in love with an alien who has lived on Earth for four centuries.

What she said, wore, sang and did instantly became the talk of the town. Her love of fried chicken and cold beer spilled over to China, creating a boom for chicken-and-beer delivery there. Couples rushed to Namsan Tower to imitate the couple’s ritual of hanging a lock on a fence as a symbol of endless love. The clothes Cheon wore, the places she went to and the car she drove all became hot. A “syndrome” (as it is known in Korea) was born. That is why the advertising, fashion and consumer industries invest in and rely heavily on celebrity marketing. Jun is estimated to be worth more than 300 billion won ($281.7 million), and that figure could rise into the trillions of won when considering her impact overseas.

I can’t hide my old career habits and journalistic genes. Having been a business writer for so long, I somehow came to connect the Cheon Song-yi syndrome with the creative economy that President Park Geun-hye so values and longs for. It is not so difficult to assess a success story. Anyone can expound on the pros and cons after the results are out. That is why people rave about the secrets to successes of megahit movies, books, games and dramas. So this is how I applied the Cheon phenomenon to the creative economy context.

First of all, Jun reinvented herself on the program. She silenced her critics with her acting. Jun had been just a pretty face when she debuted on a TV commercial in 1999. After a long hiatus, she made a comeback in the 2012 office-box hit “The Thieves,” where she played a sexy burglar, jumping from tall buildings on wires in a skin-tight suit. In her recent TV role, she was audacious, natural, hot-tempered, pretentious and shallow - and lovable, even when drunk.

Her newfound talent may have been the byproduct of the “10,000-hour rule,” as championed by Malcolm Gladwell in his book “Outliers.” Few are born actors. They are made into good actors after rigorous practice, failures, slumps, recoveries and commitment, until they reach 10,000 hours of trying. Only a few get the spotlight from their debut. The goal of building a creative economy should be no different. It cannot be achieved over a short period of time. The president should not grow impatient about achieving results during her term. The goal must be worked on for 10,000 hours, which can take years.

Second, China has become Korea’s biggest market from consumer products related to the entertainment business. The Korean Wave - the global popularization of Korean entertainment programs and stars - started in Japan, where Bae Yong-joon became an iconic figure. But China is now the hotbed for demand of Korean pop culture. “My Love From the Star” became a phenomenal hit there. The Hyundai Economic Research Institute has estimated the economic effect from Bae Yong-joon’s overseas popularity to be around 3 trillion won. But Jun could make a bigger splash. She is well received in China. Although she denies it, the Chinese like to claim her as one of their own, citing her real surname, Wang. The China.com website already reports that Jun is of Chinese ancestry. The creative economy also must target China.

Third, Jun played the haughty and yet innocent character as if she was herself. An official from her former management company Sidus HQ said Jun acted as if she was in other people’s shoes. She is finally free to show herself because she has found the right shoes. The Korean economy and companies, too, have been busy mimicking bigger counterparts. They excelled in following the trends and catching up. But now they must overcome imitation and attempt to lead the pack. Naturalization and originality have the power to move people.

Fourth, finding the right ingredients and blending them well requires as much talent and drive as originality. “My Love From the Star” borrowed all the elements from home and abroad to make a popular drama - good-looking stars, supernatural powers, rich and famous people, romance, comedy and mystery. It didn’t attempt to just copy the menu, but find the right mix for its own recipe.

In the end, the scenes and story seemed familiar, but the results were more fun because of their satirical quality. Italian high-end designer brands learned from the aesthetic legacy of their Roman ancestors. Nothing is entirely new. Re-creation is the path to a creative economy. The Park Geun-hye administration should also extract the excellent qualities and doses from past administrations. How hard it studies to find the right mix could determine its success.