Companies to bump up investment

Companies to bump up investment 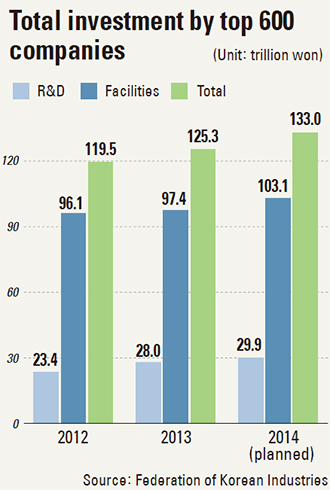 The top 600 companies in Korea plan to invest a total of about 133 trillion won ($124.7 billion) this year, up 6 percent from 2013, according to a survey by the Federation of Korean Industries released yesterday.

Of the surveyed companies, 255 said they will invest more than last year, and 145 will invest less. The companies cited enhancing competitiveness and initiating new businesses among their reasons increasing investment.

“It is an indication that many local companies are willing to prioritize investment despite uncertainty in the global economy stemming from such factors as the tapering of monetary easing in the United States, troubled emerging markets and a sluggish domestic market,” the FKI said in a statement.

Manufacturing companies said they plan to invest a total of 86 trillion won, which would be 6.5 percent more than last year.

Oil refiners, auto and auto parts makers, and producers of electronic components, computers and telecommunications devices will lead the growth in investment among manufacturers, while utility service companies and broadcasting and knowledge service companies will boost investment in the non-manufacturing sector, FKI said.

In the survey, one in four companies called for the government to reduce taxes on investment.